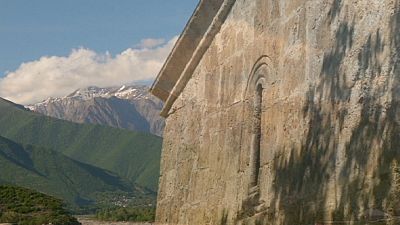 This final edition of Azerbaijan Life takes us to the city of Sheki, nestling in the foothills of the Caucasus mountains.

For centuries, it has been a stop-over on the silk road for traders and merchants. It remains a vibrant hub, its daily market drawing eager stall holders and shoppers from the outlying villages.

One Sheki industry is well known beyond Azerbaijan’s borders – the silk works. Handmade carpets made to order. With silk threads, one worker will stitch just two centimetres per day, while four centimetres of wool are added until it is completed.

The colours are all from natural sources, mixed to an old recipe. One breathtaking carpet we saw took eight long months to complete – a work of art.

“We are very proud. We made this carpet with our own hands, yes, our golden hands,” said a proud worker.

In one area, the factory has embraced modern technology for the silk threads, which all come from the company’s own silk worms.

“The silk factory has been going since 1931. Thanks to new technology, our factory is becoming more advanced, but we still only use natural colours,” says Sheki Silk Company manager Natella Movsumova. “We make carpets, scarves and handkerchiefs of natural silk only. Sheki is famous for its silk industry and we aim to follow our traditions and to maintain those traditional methods and respect our history.”

The exquisite stained glass windows of the Sheki Khan Palace owe their existence to the silk industry. Italian merchants brought the glass here to trade it for silk. Decorated with magnificent frescos, the palace was built in 1762 by Hussein Khan, who was also a well-known poet.

The World Bank met the bill for its restoration nine years ago. The original roof has been renovated by traditional craftsmen – no nails or glue were used.

“If there wasn’t any other historical place in Azerbaijan, if there wasn’t anything else, it would be enough to show Sheki Khan Palace to the world as proof of our history, our architecture and our art because here, all the architectural styles are mixed,” says our guide Zamina Rasulova.

The tea house is also rich in Azeri history. Tradition has it you first take some sugar before the strong tea reaches your lips. In medieval times, rulers believed the sugar would cancel out any poison which their enemies may have left in the tea. No poisonous acts have been recorded here – nothing stronger than herbs such as thyme and mint.

Azerbaijanis have a saying: “When you drink tea, the cup count doesn’t matter.” Tea is almost sacred here.

Travelling in this region in the 13th century, the world famous explorer Marco Polo reported he saw springs of “black goo” bubbling from the ground. Many of those springs have been covered over, but there remains so much oil, you can take a bath in it. A therapeutic visit to a local oil spa has become popular.

“I am very positive about an oil bath. I have been here before and I saw an improvement in my health so I came back,” says one man.

“It’s a marvellous therapy, it’s like having a bath in hot chocolate,” says a woman.

People have been taking oil spas for hundreds of years. Back then, medicine men said it had many, many benefits. More recently, doctors have said it is good for skin complaints. Ten minutes is the maximum you can stay emerged in the bath.

Traveller’s diary: What's in a handshake?