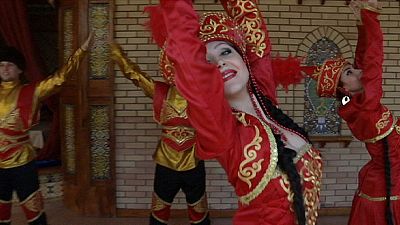 In Kazakhstan the nearest seaside is thousands of kilometres away. In June the temperatures here are in the 30s Celsius and it is positively Mediterranean. What is called for is a nice cooling drink and a dip in the water. You see in Astana, as the Americans would say “Life is a beach”.

The word Astana means ‘capital’ and the city – in the north central part of the country only gained that status in 1998.

June is one of the hottest months of the year and the weekend is a time of get out and enjoy the weather. All the more so for, despite scenes of summer sunshine, Astana is officially the second coldest capital in the world.

Winter temperatures plummet to as low as minus 30 so all the more reason to relax and grab some rays when you can. Many city dwellers head to the river for a short cruise.

“It is an interesting little adventure for them. People go from work to their stuffy houses, then they change and come here to relax in the fresh air,” explained Yuri Leonidovich a river boat captain.

The river Yessil is part of the city’s Central Park a focus for families. One young mother told us why she brings her children to the area: “I like the park because our children can go swimming here, we can take a boat ride, we have a beach so we can relax and sit down in the quiet. We like it a lot. We are very happy with the city and enjoy it here.”

The river defines Astana and its character. On the right is the old part, the left is where the new city is reaching for the sky with futuristic new buildings. Investment will be vital. Rating agency Moody’s has just rated the outlook as stable which Yerlan Kozhagapanov, the city’s deputy mayor, hopes will lead to further investment.

“This event is a clear additional signal to foreign investors that they should invest in our economy and that most importantly that they can trust us,” he said.

Music and dance remain in the soul of the city despite its march towards the future which has seen four million square metres of housing spring up in the last three years.

It is a young city with the ambition of making its mark in Asia and beyond. That could prove to be a delicate balancing act for the planners and money men.

Astana with its forbidding winter climate is a somewhat isolated location in the centre of the central Asian steppe and there is no doubt it has been a huge cost to create this sparkling city.

It has not all been a smooth transition from the past as the buildings literally grew up round the people. Damir Alimov is a retired construction worker and he remembers those days: “It was difficult to walk along the streets of Astana from the district where I live to the centre in the mud in the autumn and spring; some people had boots to wear just to get to the bus stop. Now everything has changed.”

Constantly changing and evolving too is the club scene. Astana’s young people are learning how to enjoy themselves on a night out.

Many of the DJs will tell you they are still learning their craft and building up their knowledge of the latest trends in music.

“We are influenced by Europe and America. We watch their stars and our musicians, our bands and stars try to achieve their level and obtain their experience. From that moment they start to grow, we hope the stars and people slowly get used to this kind of life,” explained DJ Slava FX.

Next time on Kazakh life we travel to the country’s biggest city Almaty and hear of Kazakhstan’s growing film industry.