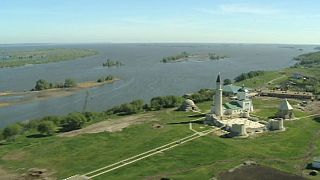 On the banks of the Volga river, in the very heart of Russia, the republic of Tatarstan has reunited two religions in its history.

Throughout the ages, explorations and wars along the Volga (Russia’s largest river) have shaped the destinies of this truly diverse place; as Yevgeniya Novikova, a Tatarstan tourism expert explains:

“The Volga helped us to conquer new lands in the Middle Ages and its importance as a connecting thread between the centuries and civilisations, between the people, cultures and religions of those who live on its banks, is invaluable.”

Although the river remains a major transport artery its waters still pose a risk. Only last year, a river boat cruise sank on the Volga, killing 122 people.

“They check all the vessels – their technical condition, the engines, hulls, fire safety of any and all ships that sail on the Volga.” said Yevgeniya Novikova.

The Volga has played a unique role in Tatarstan’s history. When the Russian Tsar Ivan the Terrible conquered Kazan in the 16th century, he did it by using the small island of Sviyazhsk. It lies just upstream from the Tartar capital and was a springboard for his attack. Spearheading Russia’s military and cultural arrival.

Father Superior Siluan, from the Assumption Monastery illustrates the nature of religious tolerance in Tartarstan:

“Modern Tatarstan is, of course, a combination of two cultures, the Russian Orthodox culture and the Islam-based Tatar culture. At the same time it’s clear that these two cultures don’t merge into a single one – they remain separate while enriching each other, as has always been the case, a peaceful co-existence.”

Bare church walls and decaying frescoes are the legacy of the Soviet era. When many of the island’s historical buildings were demolished, others were turned into Gulag prisons or storehouses.

Valeriy Kosushkin is a Fine art restorer: “For a period, this cathedral was used as a warehouse for grain and salt, which contributed to its degradation. And then, for a long time, it was simply abandoned.”

Today, massive restorations are bringing the 16th century island town back to life. After decades of oblivion, Sviyazhsk is once again a national history reserve, a window to the past.

Almaz Kazakov, a Blacksmith agrees: “Many crafts have unfortunately been forgotten and here anyone can try to forge the metal, to fashion clay into a pot or to weave a basket.”

Just a few hundred kilometres downstream, the Volga takes you to another ancient town. Bolgar, is the capital of the Tatars’ historical ancestors, who converted from paganism to a new religion, brought by Arab missionaries in early 10th century.

“Ancient Bulgars adopted a religion that was new to them – Islam. From this exact place and time Islam started to spread throughout Europe and Siberia.”

The mighty Volga Bulgaria controlled much of the trade between Europe and Asia before its decline in the 13th century. Today, the remains of mosques, mausoleums, courthouses and baths are becoming a pilgrimage site for religious followers and archaeologists.

“Both of our republic’s unique heritage sites – Bolgar and Sviyazhsk, are being restored and revived so that we can preserve and study the monuments of the two religions that have been co-existing in our land for centuries, side by side.”