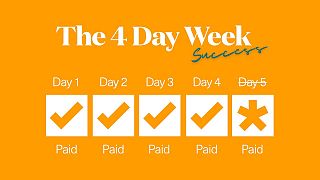 2022 was arguably the year of the 4-day workweek: the UK started a six-month pilot programme hailed the biggest of its kind; Spain launched its own pilot in December, and Belgian employees won the right to decide whether they want to work four or five days a week.

In Scotland, the government announced the beginning of a trial to start in 2023 and Wales is also considering it.

Now 4-Day Week Global, the company that ran the UK trial alongside Cambridge University and Boston College in 2022, released the results of their first completed international pilot programme, the largest published trial to date.

The study, which included 33 companies and almost 1,000 employees, found that none of the participating companies planned on returning to a 5-day week once the trial had resumed.

And 70 per cent of employees taking part also said their next job would need to offer a considerable salary increase to go back to the 5-day schedule.

How does the four-day workweek trial operate?

What did the data show?

Of the 33 companies that participated in the international trial, 27 filled out a survey where they were asked about their overall experience and whether they would continue their 4-day week.

Among the 27 surveyed, 18 said they were definitely continuing after the pilot, seven said they were planning to continue but hadn't made a final decision, one said it was leaning towards continuing and one was not sure yet. None of the companies surveyed suggested a wish to stop the scheme.

On a scale of 0-10 with 0 being very negative and 10 being very positive, the average rating companies gave to the trial was a 9.

From the employee side, on the same scale of 0-10, the average overall experience of the trial was 9.1.

Perhaps unsurprisingly, virtually all of the employees (96.9 per cent) said they wanted to continue the trial.

The positive trend is reportedly attributed to employees’ having more time for their hobbies, household work, and personal grooming.

Workers were happy, but what about productivity and finances?

Participating companies were asked to provide data on revenue and employee productivity during the duration of the trial. They were also asked for data from the same six-month period a year earlier to provide a larger comparable period.

For the six companies that supplied sufficient data across the six months, overall revenue rose 8.14 per cent (weighted by company size) by the end of the trial. And when the revenue was compared with the same six-month period the previous year, the increase was 37.55 per cent.

Proponents of the four-day week argue that the shorter work scheme provides multiple benefits to the organisations that implement the schedule, to the employees who work it, and also to the climate, due to reduced energy expended in commuting.

It added that their calculations should serve as a strong indication that "it’s time to retire the nearly hundred-year-old convention of the five-day, forty-hour week".