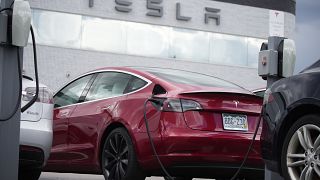 Last month, Elon Musk announced that the beta version of Tesla’s "Full Self-Driving" (FSD) software was available across North America for all users who purchased the option.

But clearly, not everyone is happy about the launch.

Tech entrepreneur Dan O'Dowd is waging a campaign to stop Tesla's self-driving software in its tracks. He calls its deployment “reckless” and the cars “unsafe” - and is filming Teslas mowing down child dummies to prove his point.

Even Tesla customers have filed a class action lawsuit against the company, claiming they were duped by claims that full-fledged autonomous driving was imminent, when it has instead repeatedly run into roadblocks in recent years.

"It is truly terrible. There are plenty of people making self-driving cars of various sorts. This is the worst by far. It is the worst in terms of reliability that I've ever seen," O’Dowd told Euronews Next from his office in Santa Barbara, California.

In its latest video, shot in October, it alleged that the software failed to recognise a pram placed on its path, causing the car to repeatedly hit it and run over the small mannequin placed inside.

This summer, the software engineer already caused an outcry with a video showing his Tesla – allegedly in Full Self-Driving mode – mowing down child-size dummies.

Tesla hit back at the Dawn Project, sending a cease and desist letter in August claiming it had been "disparaging Tesla's commercial interests and disseminating defamatory information to the public".

O’Dowd’s critics have questioned the motives behind his campaign, saying carmakers use his software in various systems, including automated driving technology. He says he's not a competitor to Tesla, and there is no conflict of interest.

Full Self-Driving is far from being autonomous

Tesla did not reply to Euronews Next’s request for comment on the Dawn Project’s latest video, but the carmaker’s website gives clear instructions.

"Autopilot, Enhanced Autopilot, and Full Self-Driving Capability are intended for use with a fully attentive driver, who has their hands on the wheel and is prepared to take over at any moment," reads Tesla’s website.

It also emphasises that the feature does not make the vehicle autonomous.

Musk himself has acknowledged that the full self-driving software would not gain regulatory approval in 2022, as Teslas are not yet ready to be driven without someone behind the wheel.

What about all the people who didn't agree? The pedestrians, the other drivers, they never agreed.

But that’s not enough to reassure O’Dowd.

“One could make the argument that the people who use it have been warned. But what about all the people who didn't agree? The pedestrians, the other drivers, they never agreed,” he told Euronews Next.

The controversial software was first tested on the roads in October 2020. Since last month, the $15,000 software, still in beta version, is available for purchase to all users in the US and Canada.

O’Dowd unsuccessfully ran for the US Senate this year campaigning against a "move fast and break things" mantra he says is leading to dangerous technology.

"They don't do the kind of testing that is needed to do something that's going to really be reliable. They make too many changes too quickly without enough thought, without thinking about the whole system's issues," he said.

"And they're going to say, 'that'll slow you down'. And you're right, it will slow you down, but it allows you to build something that is going to work and isn't going to be hacked".

In the United States, no approval is necessary to launch this kind of software. Musk commented on it during a conference in Berlin this summer: “In the US, things are legal by default, and in Europe, they’re illegal by default”.

However, even in the US, the future of Tesla is cloudy.

In July, California's Department of Motor Vehicles (DMV) filed a complaint against Tesla, claiming the labels it used - Autopilot and Full Self-Driving - "are a deceptive practice" suggesting its cars are able to drive autonomously, when in fact they can’t.

In the filing, the DMV states that the alleged facts are "cause for suspension or revocation of [Tesla’s] dealer licence". The case has not yet been decided on.

Reuters reported in October that federal prosecutors were also looking into whether Tesla misled consumers, investors and regulators, by making unsupported claims about its driver assistance technology's capabilities.

Data released earlier this year by US regulators revealed that Tesla cars using driver-assist systems got into 273 crashes over a 10-month period.

For O’Dowd, campaigning against Tesla is just the beginning. For this engineer from Caltech, who claims to have worked for the military forces, many of the other software we use in our daily lives are flawed.

The next issue he wants to tackle is the security of power grid infrastructure and of hospitals, which have seen an increase in ransomware attacks since the start of the COVID-19 pandemic.