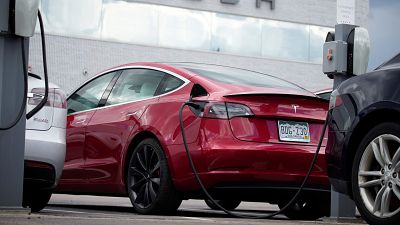 Elon Musk says Tesla is aiming to have its self-driving technology ready by the end of the year   -   Copyright  David Zalubowski/AP
By Luke Hurst  with Reuters  •  Updated: 30/08/2022

Tesla is aiming to have its self-driving technology ready by the end of the year, with the goal of rolling it out in the United States and possibly Europe.

That’s according to the company’s CEO Elon Musk, who told an energy conference one of his current priorities was getting Tesla cars “to be able to do self-driving” by the end of the year.

Tesla’s “full self-driving” (FSD) mode has been in testing since 2020, while features listed under its “Autopilot” technology have already been in use since 2015.

Full self-driving mode means the features of Autopilot, plus the ability for the car to drive through city streets, identifying stop signs and traffic lights, “with your active supervision”.

While Musk sees this as the future of Teslas, his ambitions are up against growing public and regulatory scrutiny over the cars’ autonomous or partially automated driving systems technology.

In June this year, the US Department of Transportation released initial data on the safety performance of “Advanced Vehicle Technologies”, with its report on what it calls “Level 2 ADAS (advanced driver-assistance system) equipped vehicles” making grim reading for Tesla.

These types of vehicles provide speed and steering input when the driver assistance system is activated, but the driver needs to remain fully engaged with driving the vehicle.

The report does stress that as data doesn’t include the total number of vehicles on the road or vehicle miles travelled, “these data cannot be used to compare the safety of manufacturers against one another.”

Speaking at the conference in Norway on Monday, Musk said he was focused on his SpaceX Starship spacecraft and self-driving Tesla electric cars.

"The two technologies I am focused on, trying to ideally get done before the end of the year, are getting our Starship into orbit...and then having Tesla cars to be able to do self-driving,” he said.

He added he wanted self-driving “in wide release at least in the US,” as well as potentially in Europe “depending on regulatory approval”.

Self-driving a battleground for Musk fans and foes

The update comes amid something of a battle between Tesla’s detractors and its fans, which have been conducting their own private tests with the company’s self-driving technology.

The Dawn Project campaign group, led by tech entrepreneur Dan O'Dowd - who once ran for the US Senate - claims it is “campaigning to ban unsafe software from safety critical systems”.

The group has released a number of videos allegedly testing Tesla’s FSD software, showing a Tesla in autopilot mowing down child-sized mannequins on a test track, as well as on a public road in California.

The Dawn Project has launched a nationwide TV campaign warning of the alleged dangers of Tesla’s FSD software.

Some Tesla enthusiasts have carried out their own tests in response. One, in a video published on YouTube, shows a driver using the FSD in a Tesla Model X which slows down when it approaches cyclists on the road.

The letter claimed the Dawn Project and O’Dowd “ "have been disparaging Tesla's commercial interests and disseminating defamatory information to the public”.

Tesla threatened to take legal action, saying the tests in the videos are "likely fraudulent" and "misrepresent the capabilities of Tesla’s technology".

Tesla said its FSD Beta "does recognise pedestrians, including children, and when utilised properly, the system reacts to prevent or mitigate a collision".

The Dawn Project said its tests "are completely legitimate and not deceptive," and called Tesla's letter "marketing propaganda".

Paris to Berlin in an hour: Is this the future of rail travel?