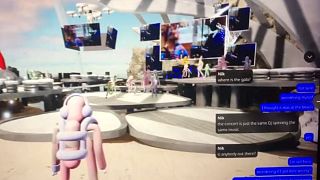 Imagine you organised a party and no one came. It’s every host’s nightmare, perhaps even more so when you’ve spent nearly €400,000 on the venue.

Earlier this week, the European Commission's Foreign Aid Department hosted a party in the metaverse to try and raise awareness among younger audiences about the work that they do.

According to reports, just six people made a digital appearance at the event.

The department works to support countries around the world, whether that’s by giving grants to developing countries, making investments to reduce poverty or with contributions to climate finance.

It has spent €387,000 on its metaverse platform, designed to promote the EU’s Global Gateway initiative, which hopes to see a €300 billion investment in building new infrastructure across a variety of countries.

One attendee who did show up at what was billed as a “gala event” was journalist Vince Chadwick.

“After initial bemused chats with the roughly five other humans who showed up, I am alone. I am alone,” he tweeted.

'24-hour beach party' in the metaverse

The concept behind the event was simple enough: to educate young people about the bloc and draw them into a space where they could learn more about what the EU does.

A spokesperson for the Commission told Euronews Next that "the target audience is 18–35-year-olds who identify as neutral about the EU and are not generally engaged in political issues".

Advertised as a "24-hour beach party" with a tropical island backdrop, Chadwick reported that upon arrival, just five other guests were present.

Not long into the party, after a few words were exchanged, guests started to peel off, leaving Chadwick as the last avatar standing.

Euronews Next contacted the European Commission for comment. A spokesperson said, "The 'gala' was an online event, which took place on November 29 from 9 to 10 pm.

"Our statistics show 300 people connected during the gala, and that over 5,000 people on that day (November 29).

"We consider that the metaverse is an innovative approach to reach young people that do not read newspapers and websites, while we recognise that the user interface could be made more user-friendly and appealing.

"The platform is still performing better than our static, traditional websites".