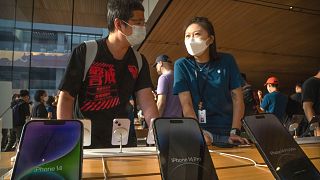 Apple is warning customers they'll have to wait longer to get its latest iPhone 14 models, following a strict COVID-19 lockdown at a key factory in China.

The tech giant said the factory operated by Foxconn in the central city of Zhengzhou is “operating at significantly reduced capacity”. It did not give details on the scale of the reduction.

Apple, which began selling its iPhone 14 range in September, said customers should expect longer waiting times for the devices - but there again, it did not say how long the delays would be.

Last week, Chinese authorities imposed a seven-day lockdown of the area around the Foxconn factory following a surge in infections in Zhengzhou and the departure of workers from the plant.

The factory, which employs about 200,000 people, has been rocked by discontent over stringent measures to curb the spread of COVID-19, with many workers fleeing the site.

China on Monday reported its highest number of new COVID-19 infections in six months, with disruption to the world's second-largest economy spreading nationwide since October.

At the weekend, health officials said they would stick with strict coronavirus curbs, disappointing investors hoping for an easing of the government's zero-COVID policy.

Meanwhile, Apple expects to produce at least 3 million fewer iPhone 14 handsets this year than planned due to weak demand for lower-end models, Bloomberg News reported on Monday, citing people familiar with the plan.

It has iPhone production sites in India and southern China, but its biggest is in the city of Zhengzhou in the eastern Chinese province of Henan.

On Monday, it said it was working to resume full production at Zhengzhou as soon as possible. A person familiar with the matter told Reuters that the target is by the second half of November.

At the request of the local government, Foxconn said it would implement measures to curb the spread of COVID-19, including restricting employee movement to between their dormitory and factory area.

Foxconn said the provincial government "has made it clear that it will, as always, fully support Foxconn".

"Foxconn is now working with the government in a concerted effort to stamp out the pandemic and resume production to its full capacity as quickly as possible," it said.