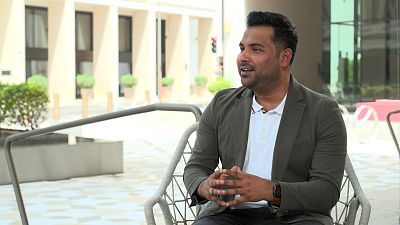 Neeshad Shafi wants to encourage more young people to be part of the conversation around climate change
By Mohamed Elashi  & Guy Shone  •  Updated: 09/11/2022

The fight against climate change has been dominated in recent years by activists like Sweden's Greta Thunberg. While her message has had a huge impact and mobilised people in ways not seen before, it's also highlighted the divide in support for action in the Global North versus the Global South. Neeshad Shafi aims to change that.

"If the right sort of transition is not done, the whole survival of this region will be jeopardised."

Already noted as one of the 'World's 100 Most Influential People in Climate Policy 2019,' Neeshad is looking to the future with the Arab Youth Climate Movement Qatar, a grassroots non-profit organisation he co-founded. Neeshad told The Dialogue that the Middle East region "is one of the worst impacted by climate change," with action needed urgently.

"If the right sort of transition is not done, the whole survival of this region will be jeopardised," he cautions. "This is what the IPCC…is telling us, that the whole region will be inhabitable in the coming decade."

It's a stark warning and one that Qatar has been keen to act on. As one of the world's big energy producers, it has already outlined ambitious goals to curb greenhouse gas emissions across all sectors. Neeshad is positive policies like this will make a difference, but he also says people have to come together.

"Humanity always survived challenges in the past…at the moment, we are living in a very different shape of the world. A country looks at its own priorities. The people I work with always want to work beyond their nations, their culture, and their differences…to come together for climate action," says Neeshad.

This and the enthusiasm of the young people he works with gives Neeshad the strength to believe the future can be brighter. However, he is careful to add that climate action movements, such as the one he set up, need to be funded.

"The Global North movement looks more privileged…in terms of finance. In the south where the climate impacts are far greater, they don't get the funding…if they don't get the right support, they will not even survive." It's this that's pushing Neeshad to make sure the Arab World has a strong voice on climate issues.

His passion for the environment sprouted partially due to "the vacuum of not having young people from the Arab world at global conversations," he says. This pushed him to find a way to engage the next generation of climate activists.

"They will be inheriting this region in the coming years," he says and will be the leaders of the future. That's why he believes it's so important to build them up with "the right knowledge and skills."

Neeshad was inspired to start his grassroots movement in Qatar for young people after realising the Global North movement failed to understand "special things" about the Gulf Community. He explains there's a simple reason why the Friday's for Future movement failed to strike a chord in this region.

"[T]hey don't understand Friday is naturally a holiday to most of the Muslim countries in this part of the world…where the schools are by default closed," he says. "You can't do Friday for Future marches, so we try and do another day of activism."

"We have to come with real science, real knowledge, real solutions."

He also aims criticism at some of the ways activists have been trying to bring attention to the issue of climate change. "Most activists are jumping into [sic] the bandwagon of activism, through media or just to be a social media gimmick," he says. While careful not to mention any group specifically, Neeshad believes there is a better way.

"We have to come with real science, real knowledge, real solutions. That's what the goal of activism or an activist should look like. Let them understand the realities and know we can do it collectively and then do it together."

Neeshad aims to use his background as a climate scientist to help people understand what's happening around them and how they can make a difference. His voice is resonating globally too. He participates at world summits, often rubbing shoulders with heavyweight politicians such as the US special presidential envoy for climate, John Kerry.

Now Neeshad is looking ahead to COP 27 in Sharm El-Sheikh, Egypt. It's a summit he believes will be a defining moment for countries in the Middle East, giving the region a stronger voice at the decision-making table.

Neeshad says he is more "energised to do better" when he looks at the progress made and the young people he works with. As a result of what he sees as the untapped potential in the Middle East region, Neeshad feels empowered to do even better in the future.