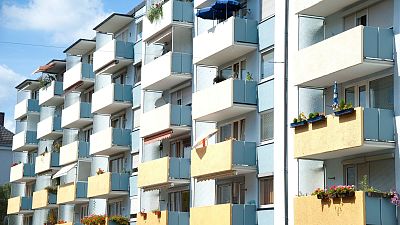 Those who have been renting a room or an apartment in Europe in the past 10 years may have noticed that their monthly fees have recently gone higher, while those new to the rental market might have no idea that things used to be a lot easier before - at least on their finances.

Europe’s rental prices have increased by a staggering 17.6 per cent in the past 10 years. Amid the backdrop of rising inflation on top of an energy crisis that’s threatening to leave many households unable to pay their bills this winter, the continent has seen a growth of 1.7 per cent in the past three months alone compared to the same period in 2021.

According to the latest data by Eurostat, rents have been growing steadily since 2010, while the housing market had some ups and downs before starting spiralling upwards in 2015.

Where was the highest rise?

Rents grew almost everywhere in Europe, but nowhere have they risen as dramatically as in Estonia.

The Baltic state recorded a rental price increase of 214 per cent, as an influx of people to the country’s biggest cities, including Tallinn, pushed demand up while supply remained limited.

This situation was recently exacerbated by the arrival of tens of thousands of Ukrainian refugees fleeing the Russian invasion in their country who needed housing.

Following Estonia in the race to the top is neighbouring Baltic state Lithuania, where rents are now 139 per cent higher than they were in 2010.

Renting a place in Lithuania’s capital Vilnius has become near impossible, to the point that the country’s lawmakers are considering introducing a price cap on rent.

According to the Baltic News Network, students are the ones who are suffering the most from these rent hikes, with a budget apartment in Vilnius (including a bathroom and the kitchen) now costing €400 compared to €100 euros or less in 2021.

Perhaps surprisingly, given its experiencing some of the lowest inflation rates in the EU, the third highest rent increases were seen in Ireland, where rents have increased by 82 per cent in the past 10 years.

The reason for such an increase is, as in the case of Estonia and Lithuania, a lack of properties to rent.

The exceptions to the rule

While almost all countries in Europe saw an increase in rent prices in the past decade, there were two exceptions: Greece and Cyprus.

Going against the grain, these two countries actually experienced a decrease in rental prices, though these are almost negligible compared to the staggering increases registered by Estonia, Lithuania and Ireland.

In Greece, rent decreased on average by 24 per cent from 2010 until July 2022. In Cyprus during the same period, rental costs went down by 0.2 per cent.

Conversely, buying a house may seem like a better solution to avoid wasting money, but under the current housing market, this is not an easy option either.

House prices across the European Union have increased by 48 per cent since 2010, according to Eurostat.

In Estonia, house prices have also seen increases in the three digits, with homes now costing 196 per cent more than they did in 2010.

Only in Greece, Italy and Cyprus have prices decreased, with houses now costing respectively 23, 8 and 6 per cent less than they did over 10 years ago, according to Eurostat.