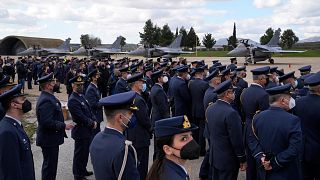 Cut global military spending and use the money to combat the climate crisis, pandemics and extreme poverty, says a letter signed by high profile figures.

Launched in December 2021, the Global Peace Dividend is simple. All UN member states agree to reduce their military budget by 2 per cent for five years.

Half the money saved by the agreement is put into a UN managed fund to tackle some of the biggest problems facing humanity - including climate change. The rest of the funds can be used by world leaders to solve the individual issues facing their own nations.

“Humankind faces risks that can only be averted through cooperation,” the letter reads. “Let us cooperate, instead of fighting among ourselves.”

The campaign says that countries are under pressure to spend more on their militaries because others are doing the same. In 2021, global military spending rose to €1.75 trillion, an increase of 2.6 per cent according to the Stockholm International Peace Research Institute.

“The feedback mechanism sustains a spiralling arms race - a colossal waste of resources that could be used far more wisely,” the letter’s signatories argue.

Who is backing the letter?

The call to reduce military spending has been backed by more than 50 Nobel Prize winners, political leaders and celebrities including ‘Don’t Look Up’ producer Adam McKay.

Although it doesn’t yet have the backing of any specific country, there is a precedent. After a brutal civil war in 1948, Costa Rica abolished its military and used the money it saved for social investment in education, health and the environment.

The country was recently awarded the UN-backed Earthshot Prize for the work it has done to restore its once devastated forests and has one of the highest standards of living in Central and Latin America.

If every UN member state signed up for the initiative, Global Peace Dividend estimates that around €1.1 trillion could be generated by 2030 to address “humanity’s grave common problems.”

These new resources could positively impact the lives of millions, at zero cost for nations.

It is an amount they say is comparable to the total investments made in renewable energy around the world.

But you don’t have to be a world leader or Nobel Prize winner to back the campaign. Nearly 50,000 people have signed a petition on Change.org supporting the initiative.

“In an era of mounting challenges to human welfare, these new resources could positively impact the lives of millions, at zero cost for nations,” the petition says.