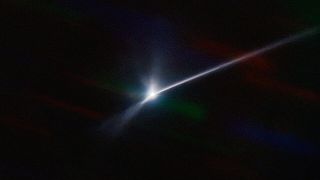 The vast plume of dust and debris blasted from the surface of the asteroid Dimorphos by NASA’s DART spacecraft   -   Copyright  CTIO/NOIRLab/SOAR/NSF/AURA/T. Kareta (Lowell Observatory), M. Knight (US Naval Academy)
By Luke Hurst  with AP  •  Updated: 05/10/2022

The NASA mission to crash a spacecraft into an asteroid to nudge it off course has created a 10,000 kilometre trail of debris across space.

The SOAR Telescope in Chile has been tracking the course of Dimorphos - the asteroid moonlet targeted by the mission - since it was impacted during NASA’s Double Asteroid Redirection Test (DART) last week.

Dimorphos forms part of the double-asteroid system of Didymos, which was the target of DART, the first planetary defence test that tried to modify the orbit of an asteroid.

The goal of DART is to gather data to see whether nudging an asteroid off course is a viable way to deal with a potential future asteroid hurtling towards Earth.

The spacecraft was travelling at 22,500 km/h as it smashed into the asteroid some 11.3 million km away from Earth on September 26.

And while it will take some time to gather the necessary data, the impact of such a forceful collision is already clear to see.

The SOAR Telescope has imaged a 10,000 km-long tail coming from the asteroid, two days after the impact.

“It is amazing how clearly we were able to capture the structure and extent of the aftermath in the days following the impact,” said astronomer Teddy Kareta, who works at the Lowell Observatory in the US, and used SOAR to capture the debris.

“Now begins the next phase of work for the DART team as they analyse their data and observations by our team and other observers around the world who shared in studying this exciting event,” added astronomer Matthew Knight from the US Naval Academy.

“We plan to use SOAR to monitor the ejecta in the coming weeks and months”.

The team operating SOAR said these observations will give insight into the nature of the surface of Dimophos, how much material was ejected, how fast it was ejected, and the size of the particles ejected.

The mission was hailed as a success by NASA, with Mission Control's Elena Adams telling a news conference following the collision: "As far as we can tell, our first planetary defence test was a success…I think Earthlings should sleep better. Definitely, I will".

The impact was captured by both the Hubble space telescope, and the newly-launched James Webb Space Telescope.

The $325 million (€333 million) mission is the first attempt by a space agency to nudge the position of an asteroid or any other natural object in space.

Launched in November last year, DART took 10 months to reach its target, which has been orbiting the sun for aeons without threatening Earth.

Scientists insisted DART would not shatter the moonlet, with the spacecraft weighing in at 570 kg, compared to the asteroid’s 5 billion kg.

But they are confident it should reduce its 11-hour 55-minute orbit around Didymos, which they stress amounts to a significant change over the course of years.