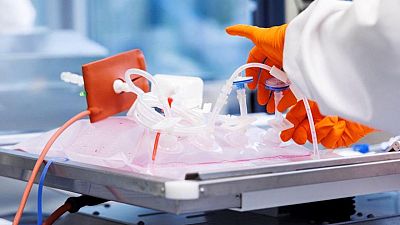 <div> <p>By Natalie Grover and Stine Jacobsen</p> <p><span class="caps">COPENHAGEN</span>/LONDON -Bavarian Nordic, the maker of the only approved monkeypox vaccine, said on Wednesday it was exploring the viability of using technically expired doses to help bridge a growing gap between demand and supply due to the current outbreak.</p> <p>In an interview with Reuters, Chief Executive Paul Chaplin said global demand for the vaccine is “exceeding our ability to deliver”. </p> <p>More than 40,000 confirmed cases of monkeypox, including a handful of deaths, in over 80 countries where the virus is not endemic have been reported since early May. About a third of the current global case count is in the United States. </p> <p>The World Health Organization has labelled the outbreak a global health emergency, while scarce supply of the vaccine has spurred several countries to stretch out doses, with largely unknown outcomes, to make the most of existing stocks. </p> <p>One way to address that problem is evaluating whether millions of doses delivered to the United States in previous years that have technically expired are still viable. </p> <p>From the testing conducted so far, roughly half a million doses still have shelf life, Chaplin said, adding that the decision to use such doses ultimately lies with U.S. regulators.</p> <p>Bavarian Nordic needs to file a request with the U.S. Food and Drug Administration (<span class="caps">FDA</span>) for “a shelf life extension on the lots of vaccine that they determine may still be viable,” a U.S. Department of Health and Human Services spokesperson said.</p> <p>An <span class="caps">FDA</span> spokesperson said the agency is “actively working with the company and the relevant health agencies “to obtain the necessary information to potentially requalify a subset of expired doses that meet certain quality specifications.” </p> <p>Meanwhile, U.S., European Union and British regulators have backed changing the way the vaccine is administered by injecting a smaller amount of the shot intradermally (between the layers of the skin), which increases by five-fold the doses that can be used from one vial.</p> <p>Regulators have justified the approach on the basis of a study https://pubmed.ncbi.nlm.nih.gov/26143613 involving more than 500 adults, which compared the performance of the vaccine given either intradermally or subcutaneously (i.e. injected into a layer of fat beneath the skin), as two doses given about a month apart.</p> <p>Those who received the intradermal injection received one-fifth of the subcutaneous dose, but produced similar levels of antibodies as those who received the original subcutaneous dose, data showed.</p> <p><span class="caps">FRACTIONAL</span> <span class="caps">DOSING</span></p> <p>Chaplin raised doubts about the safety of this so-called fractional dosing approach, citing evidence from the same study that showed intradermal administration could result in increased local reactions compared to the original method, something regulators have also flagged. </p> <p>Chaplin also highlighted that the study showed that the intradermal administration prevented about a fifth of participants from getting their second shot. </p> <p>At the moment, Bavarian is not delivering vaccine doses at the pace that countries have requested, but the company is expecting to unveil additional manufacturing partnerships in the coming weeks, said Chaplin. </p> <p>“We are gearing up expanding manufacturing capacity to deliver that demand as soon as we can.” </p> <p>Days ago, the company said it had signed with Michigan-based Grand River Aseptic to expand its ability to deliver finished doses, and on Wednesday said its own Danish facility had reopened with expanded capacity. </p> <p>Altogether, Bavarian expects to deliver roughly 4 million vaccine doses by the end of the year to countries, using doses that have been newly manufactured since May, Chaplin said. </p> <p>According to a Reuters tally of government statements, there are 1.5 million vials of vaccine that have either been administered or currently available in the 10 worst-affected countries, which account for nearly 90% of all cases. The vast majority of doses are in the United States. </p> <p>The <span class="caps">WHO</span> estimates 10 million doses will be needed globally to protect the people at highest risk, with a current focus on certain men who have sex with men and contacts of people infected.</p> <p>In a post-earnings conference call, Chaplin said nine million doses of the vaccine have been ordered across this year and next, but that deliveries were largely skewed towards 2023.</p> <p>Although most orders are focused on dealing with the current outbreak, a handful of countries are considering building up stockpiles as well, he added. </p> <p>Bavarian, which has raised its 2022 outlook six times since the outbreak started in May, said sales of its monkeypox vaccine – variously called Jynneos, Imvanex and Imvamune depending on geography – amounted to 117 million Danish crowns ($15.65 million) in the second quarter. It also reiterated its full-year outlook on Wednesday. </p> <p>($1 = 7.4766 Danish crowns)</p> </div>