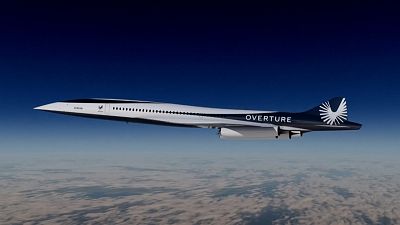 American start-up Boom Supersonic has unveiled their sleek new airliner, a superfast Concorde-like aircraft that they hope will revolutionalise how we fly and cut transatlantic travel times in half.

Dubbed the “son of Concorde,” the Overture aircraft will be able to carry between 65 and 80 business class passengers at twice the speed of today’s airliners.

The company says say its latest aircraft model will cut the flight time from New York to London to just 3.5 hours and LA to Sydney to just over 8 hours.

What’s more, Boom says the aircraft will supposedly run on 100 per cent sustainable aviation fuel, travelling at speeds of Mach 1.7 over water and just under Mach 1 over land.

"Because of some of the perceptions of Concorde that came before us as an aircraft that, while beautiful in design and super fast, was neither sustainable environmentally or economically," Boom Supersonic’s President and Chief Business Officer Kathy Savitt told Reuters at Farnborough Airshow.

"From day one of the programme we decided that our three core design principles was of course speed, but also safety and importantly, sustainability," said Savitt.

"And what we mean by sustainability is that we have to be able to operate this aircraft or allow our operators to run Overture at net zero carbon, reduce the noise levels that you saw on Concorde as well as for Boom itself to be net zero carbon, which we will be by 2025 as an organisation".

Overture will use the world’s first automated noise reduction system, flying without afterburners for a quieter experience both for passengers and airport communities.

The in-flight experience will be different too, offering head-up data displays in the windows and a view of the stars through the moon roof when cruising at 60,000 feet (18,288m).

The company is targeting a maiden flight in 2026. Pending certification, they hope to offer commercial flights in 2029.