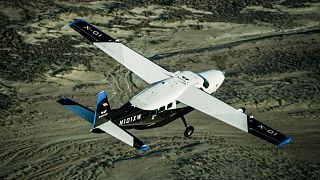 A US company is gearing up for a future where pilotless planes take to the skies.

Silicon Valley startup Xwing specialises in making standard aircraft capable of flying without pilots, with the aim of turning commuting by air into a cheaper and more efficient way to travel.

"In a few years you'll start seeing taxi networks of electric aircrafts regionally or on long hauls and it's going to be quite a different landscape".

Piette’s company has developed software capable of combining with existing flight-control systems to completely automate take-off, flying and landing of an aircraft.

"Most accidents in aviation, historically, have been due to pilot errors - the vast majority of them,” says Piette.

“I'd say these are fairly complex systems, and there's a lot of mental workload on the pilot when he needs to fly an aircraft. And that's why automation can help, because you can reduce that workload".

Watch a Tesla crash itself into a multimillion-euro private jet