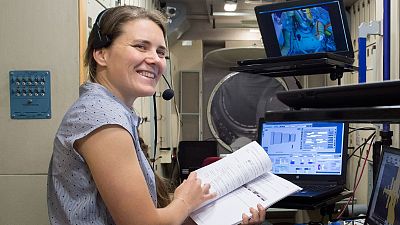 NASA astronauts will go back to riding Russian rockets and Russian cosmonauts will catch lifts to the International Space Station (ISS) with US company SpaceX from September, it has been announced.

NASA and Russia's space agency Roscosmos have signed a long-sought agreement to integrate flights to the ISS that will allow Russian cosmonauts to fly on US-made spacecraft in exchange for US astronauts being able to ride on Russia's Soyuz.

The deal ensures that the space station will always have at least one American and Russian on board to keep both sides of the orbiting outpost running smoothly, according to NASA and Russian officials.

The swap – which was somewhat overshadowed by news of a change of leadership at Roscosmos – had long been in the works and was finalised on Friday despite tensions over the war in Ukraine, a sign of continuing Russia-US cooperation in space.

"The agreement is in the interests of Russia and the United States and will promote the development of cooperation within the framework of the ISS program," Roscosmos said in a statement, adding it will facilitate the "exploration of outer space for peaceful purposes".

NASA said the agreement will "ensure continued safe operations" of the space station and protect those living on board.

Seven people are up there right now: three Americans and one Italian who flew up with SpaceX and three Russians who arrived in a Soyuz.

Tensions around the ISS

NASA and Roscosmos, the two-decade-old space station's core partners, have sought for years to renew routine integrated crewed flights as part of the agencies' long-standing civil alliance – now one of the last links of cooperation between the US and Russia – as tensions flare over what Moscow calls its "special military operation" in Ukraine.

The first integrated flights under the new agreement will come in September, NASA said, with US astronaut Frank Rubio launching to the space station from the Moscow-leased Baikonur Cosmodrome in Kazakhstan alongside two cosmonauts, Sergey Prokopyev and Dmitry Petelin.

Another crew swap will occur next spring.

No money will exchange hands under the agreement, according to NASA.

Russian cosmonauts rode to the space station on NASA’s shuttles back in the early 2000s.

Before that, during the 1990s, astronauts and cosmonauts took turns flying on each other’s spacecraft to and from Russia’s Mir station.

The Kremlin did not comment on the reasons for the change.

Rogozin had taken a confrontational stance since Roscosmos was hit with sanctions for its role in Russia's defence industry after Russia sent tens of thousands of troops into Ukraine.

He had threatened to pull out of the ISS, saying cooperation with the West was "impossible," and pointedly bragged about Russia's nuclear potential.

In a video posted on its Telegram channel, Roscosmos hailed the progress made at the space agency under Rogozin, who was appointed in 2018.

Those achievements included "a record 86 successful launches in a row, construction of the Russian segment of the ISS... and flight tests for a powerful inter-continental ballistic missile," Roscosmos said.

Rogozin has touted the capability of the new Sarmat missile to launch a nuclear strike on the United States, and said it would be operational by the autumn following successful tests earlier this year.

Rogozin appeared to revel in trolling the West, including by waging Twitter spats with billionaire Elon Musk, speaking publicly about Russia's nuclear missile capability and publishing the coordinates and satellite images of Western defence sites with the implication they could be targeted.

How the ‘Centaurus’ Omicron subvariant could become dominant worldwide

Watch: Webb Telescope’s stunning views of Jupiter and its moons