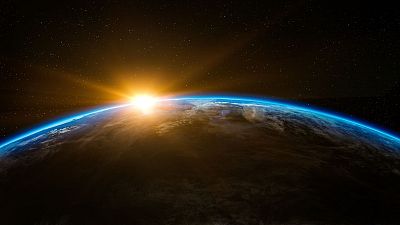 Image shows a view of Earth from space. A new study from British satellite company, Inmarsat, shows 97% of people fear the impacts of the space industry.   -   Copyright  Canva
By Aisling Ní Chúláin  •  Updated: 06/07/2022

What’s the first thing that comes to mind when you think about space?

If a new landmark report from British satellite company Inmarsat is to be believed, it’s likely to be something along the lines of aliens, Star Wars, or billionaires like Jeff Bezos and Richard Branson jetting into the cosmos as space tourists.

The study, which Inmarsat is describing as a ‘wake-up call’ for the industry, surveyed 20,000 people across 11 different countries with results showing 97 per centof people actually see space as a threat.

Chief among these concerns are apprehension over the impact of space activity on our climate and fear of space debris and collisions in orbit.

Perhaps more worrying for the industry is the finding that, while GPS/Sat Nav technologies are considered to be the most important activities in space, fewer than 1 in 10 people think about global connectivity and communications when they think of space.

Inmarsat’s CEO, Rajeev Suri, believes this is a problem because public support is ‘essential’ to the future development of space.

“We want people attracted to the sector. We want people to understand the sector. And so I think this report is a wake-up call for the industry to do much more to explain current and future benefits of space,” he told Euronews Next.

In Suri’s view, many of the benefits that space exploration brings to our daily lives are currently overlooked.

“People seem largely unaware of the role that the space industry already plays in their daily lives, or the major contribution it will be making to solve major issues, from helping to address climate change to connecting the billions of people who remain unconnected,” he said.

Suri cited navigation, television and humanitarian support when terrestrial networks are compromised as key applications we should thank the space industry for.

“It's used for weather forecasting. It'll be used for measurement of reforestation and deforestation. It can be used for precision agriculture to increase the yields,” he added.

Are concerns over space debris valid?

Still, while Hollywood and science fiction may be partially responsible for younger generations' more negative perception of space, Suri acknowledges that the issue of space debris is a real concern that the industry needs to address.

According to him, there are now around 5,200 satellites in Low Earth Orbit (LEO) – that is, at an altitude of less than 2,000 km – up from about 1,400 in 2014. And another 100,000 satellites could be launched into LEOt if current mega-constellation projects are realised.

One company or one country can dominate a certain orbit whereby you get monopoly formation and nobody else can deploy any satellites in that orbit.

“And so two things are happening. These mega-constellations mean that there'll be tens of thousands of new satellites roughly in the same orbit”.

In terms of the risks associated with these planned satellites, Suri points to three main issues.

“Number one is the issue of environmental degradation,” he said.

When satellites decay and de-orbit, large amounts of aluminium can be deposited in the upper atmosphere (between 85km and 600km above the Earth’s surface), potentially compounding the issue of climate change.

Secondly, launching an unlimited number of satellites increases the risk of orbital congestion.

“That can give rise to the Kessler syndrome, which means a number of satellites start to collide with each other and objects collide even more. And that results in a cascading amount of space debris, not just restricted to the orbit,” Suri added.

The third main concern is associated with the Kessler syndrome and is a phenomenon called orbital exclusion.

“One company or one country can dominate a certain orbit whereby you get monopoly formation and nobody else can deploy any satellites in that orbit”.

Solutions to the issue of space debris?

So how can the space sector allay these concerns?

Inmarsat is urging industry players to come together and adopt stricter rules when it comes to launching satellites, working closely with national regulators on the issue.

“When they [national regulators] give market access, they should look for actions with regard to mitigating space debris or actions to successfully deorbit without decay,” said Suri.

The company is also calling on advanced space economies to agree on basic minimum standards for satellites.

The final recommendation is for the International Telecommunications Union to get a broader mandate to not just look at spectrum, but also the issue of space debris.

In Suri’s eyes it’s not too late for the industry to act on the matter.

“There is time. You know, prevention is better than the cure,” he said.