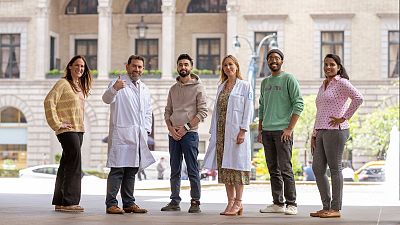 More than a dozen rectal cancer patients in the United States have seen their cancer disappear after undergoing experimental immunotherapy, in what doctors are calling an astonishing result.

The patients, who were part of a small clinical trial led by researchers from New York’s Memorial Sloan Kettering (MSK) Cancer Center, saw their tumours vanish after being treated with an experimental drug called dostarlimab.

Details of the trial were published on Sunday in the New England Journal of Medicine.

The paper described the results of 12 patients with rectal cancer, all of whom saw their cancer vanish after treatment with dostarlimab.

Participants received a dose of dostarlimab every three weeks for six months, with the idea being that they would need to undergo standard treatments of chemotherapy, radiation therapy and surgery following treatment.

However, researchers found that in every case, the cancer was cleared through the experimental treatment alone.

A first in cancer treatment

The trial has been hailed as a first in cancer treatment, with one of the paper’s authors, Dr Luis Diaz Jr of Memorial Sloan Kettering, telling the New York Times that he knew of no other study in which a treatment completely obliterated a cancer in every patient.

“I believe this is the first time this has happened in the history of cancer,” he said.

Immunotherapy harnesses the body’s own immune system to identify and destroy cancer cells.

The trial focussed on a subset of rectal cancer patients whose cancer had a specific mutation, MSK said in a statement.

This sort of rectal cancer, known as "mismatch repair-deficient" (MMRd) rectal cancer, tends to respond poorly to standard chemotherapy regimens. In the trial, researchers wanted to investigate if immunotherapy alone could beat rectal cancer that had not spread to other tissues, the organisation said.

The research, which is ongoing, has seen at least 14 patients “and counting” have their tumours disappear, with none of them experiencing significant side effects, it added.

There was no need for standard treatments of radiation, surgery, or chemotherapy, and the cancer has not returned in any of the patients, who have been cancer-free for up to two years, it said.

“It’s incredibly rewarding to get these happy tears and happy emails from the patients in this study who finish treatment and realise, ‘Oh my God, I get to keep all my normal body functions that I feared I might lose to radiation or surgery’,” said Dr Andrea Cercek of Memorial Sloan Kettering, who co-led the trial.

How does this immunotherapy work?

Inspiration for the study came from a previous trial led by Dr Diaz, which saw patients taking a drug called pembrolizumab, the New York Times reported. That trial, which involved patients with advanced cancer that resisted standard treatment, saw participants’ tumours stabilise, shrink and even vanish.

In the current trial, researchers wanted to see what a similar drug, dostarlimab, would do if used before the cancer cells had a chance to spread.

This sort of treatment focuses on particular proteins called checkpoints, which are made by some types of immune system cells as well as some cancer cells, according to the US National Cancer Institute. The checkpoints, which keep immune responses from being too strong, can sometimes prevent immune cells from effectively killing cancer cells.

Like pembrolizumab, dostarlimab is a “checkpoint inhibitor”: It essentially “releases the brakes” on an immune cell, freeing it to recognise and attack cancer cells, according to MSK.

“When the brakes are taken off the immune cells, MMRd cells look especially strange because they have so many mutations. So the immune cells attack with much more force,” Dr Cercek said.

The results have provided “what may be an early glimpse of a revolutionary treatment shift”, Dr Hanna Sanoff, an oncologist at the Lineberger Comprehensive Cancer Center at the University of North Carolina, who was not involved in the trial, wrote in an editorial accompanying the paper.

However, she added that although the results are “cause for great optimism”, such an approach “cannot yet supplant our current curative treatment approach”.

“Whether the results of this small study conducted at Memorial Sloan Kettering Cancer Center will be generalisable to a broader population of patients with rectal cancer is also not known,” she said.

“In order to provide more information regarding which patients might benefit from immunotherapy, subsequent trials should aim for heterogeneity in age, coexisting conditions, and tumour bulk”.

The clinical trial is continuing to enrol patients and is growing, the MSK researchers said. They are also investigating to see if the same method can beat other cancers, and are looking at patients with gastric (stomach), prostate, and pancreatic cancers.