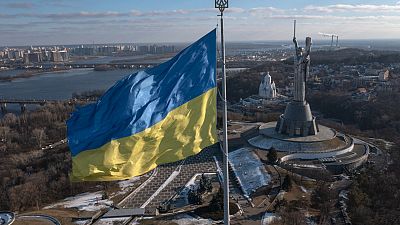 On February 24, Putin launched what he called a “special military operation” on Ukraine to “demilitarise and denazify” the country.

While it was predicted the war would be quick, Ukraine held its ground and showed its resistance. This resilience came not just from its army, but also from its civilians and tech sector.

Last year, Ukraine set many tech records, such as its first "decacorns", start-ups that have exceeded a valuation of $10 billion (€8.8 billion). In the first quarter of this year, despite the conflict, Ukraine’s IT exports had grown 28 per cent year-on-year.

At the start of the war, Euronews Next spoke to tech company employees and founders both inside and outside Ukraine to see how they were adapting. Now, 100 days on, we asked them and other companies what had changed.

The company’s chief operating officer Pavlo Deshchynskyy said around 500 employees who were in the hard-hit cities such as Kyiv and Kharkiv were moved to their office in Lviv, western Ukraine, near the border with Poland.

N-iX’s staff volunteered to drive buses full of people, not just its employees, to Ukraine's safer regions. Some employees already living in Lviv gave up their homes to their colleagues who came seeking safety.

But that picture has somewhat changed now.

“Now, there are people returning back to Ukraine and back to their homes in those cities that seem to be safe right now.

"For instance, some of our specialists have started coming back to Kyiv immediately after the Ukrainian Army freed the Kyiv region,” said Deshchynskyy.

“But most cities and towns in the north, east and south of Ukraine are still in danger. So for now, we advise our people to stay in the west of Ukraine or abroad”.

Most of the company’s specialists work remotely but in Lviv, many come into the office to work. Still, that office now has a shelter.

Deshchynskyy said the company had never stopped hiring and was glad to offer jobs to people in these difficult times.

He added that the company is also now actively hiring in Poland and Bulgaria, where many of Ukraine's refugees have fled, and that a new office in Ivano-Frankivsk - a city in the west of Ukraine that is becoming a new attractive tech hub - will open by the end of summer.

“The Ukrainian tech industry is one of the main contributors to the country’s GDP, so the sector is banding together not only to help the victims of Russia's invasion but also to support the Ukrainian IT industry and the country’s economy,” he said.

The company has donated around half a million euros to help the Ukrainians in the war, both refugees and the military, and N-iX software engineers and architects are involved in the development of various tech projects such as a website for collecting information on Russia's war crimes.

N-iX also handed over its Starlink terminals to Ukrzaliznytsia (Ukrainian railways) and the hardest-hit regions.

"Although Russian aggression has made a heavy impact on the Ukrainian economy, we believe in our victory and that the Ukrainian tech sector will grow even more,” he said.

‘People react to the sirens differently’

Western companies with facilities in Ukraine have also had to find ways to adapt.

Emmy Gengler, CEO of US-based tech company Softjourn, which has an office in western Ukraine, was wide awake when the war started.

“I was in the US at the time. So it was early evening when it started,” she said.

“I can't say necessarily that it was a total shock; we had been hearing a lot of the intelligence reports, so we knew something was coming”.

Though Gengler is usually based in the US, she has been working from the company’s bureau in Poland to support staff who have relocated. She also recently visited the company’s Ukraine office in Ivano-Frankivsk.

“Everybody has a different experience and has handled it differently. So when they hear, for example, the sirens every few days, people are reacting to it differently,” she said.

“For some, you start to understand that they heard the shells hitting, they saw smoke. And the level of concern about how it hits them and how they react to it is different for other people”.

Gengler said others do not worry about the sirens anymore.

“On one hand, it is like business as usual and it takes maybe chatting with people to understand how individually they are taking it”.

What has changed since the war began is the “proven resilience in the face of what probably has to be the ultimate type of crisis, a war,” she said.

'Our choice is to build the future, not to hold on to the past'

"Despite certain difficulties for start-ups to have the capital to sustain these challenging times, we see a lot of organisations, throughout Europe and worldwide, offering help," said Nataly Veremeeva, director of TechUkraine, an NGO platform that was launched to boost the country's start-ups.

"We have proven by our determination that we are a mature country with an ambition to grow a successful state with its spirit, taking care of its citizens, their material and mental well-being. I also think the tech sector will be one of the key locomotives to make the transformation possible, we lay very big hopes on it," she said.

"I believe now the main challenge will be to make good use of the publicity and attention from all over the world. We need to make sure everyone that wants to work with Ukraine and in Ukraine has such a possibility, to facilitate new productive partnerships and make good use of all that solid basis in our tech ecosystem we have created in the past years".

Her hopes for the future: "We soon will finish the war, get back all our territories, including the ones Russia occupied since 2014 and rebuild the country. And win the war in the first place, of course. Our choice is to build the future, not to hold on to the past".

Tech has also helped Ukraine from afar. A day after Russia’s invasion of Ukraine began, four tech entrepreneurs from around the world came together to launch - in just 48 hours - the online platform EU4UA.org, which allows Ukrainian refugees to connect with European citizens who offer free accommodation.

The four co-founders are based in France, Spain, Belgium and Colombia.

“We developed it as a non-profit organisation, as an NGO, and the idea was to connect both at scale, which was not possible for NGOs,” said co-founder Arnaud Devigne.

“The idea was to leverage technology to make this a matchmaking at scale”.

When the war began “there was a unique movement of solidarity, unique in history,” he said. “It was very emotional. People wanted to help and were ready to host anyone for no matter how long”.

The same type of impulse was seen on the refugees’ side, he said: “Basically, they were just crossing the border and trying to find the closest accommodation possible and trying to find a short term solution. Most of them thought it would not last for long”.

However, as the world realised the war would stretch on, attitudes changed on both sides.

Fewer people are now offering up their housing on the platform, perhaps due to concerns about costs and because as the war drags on it is unclear how long they will stay.

Devigne said there are about 100,000 refugees registered on the platform but only about 20,000 host families.

The attitudes of the refugees have also changed, as they realise they may need to build new lives in new countries.

“On a lot of the refugees’ profiles, they say they don’t want to depend on charity and they want to pay for their new apartment. Many of them are skilled. They want to work,” said Devigne.

He said EU4UA is now focusing on launching a platform for refugees seeking jobs in Europe.

“If through technology you can bring people together as a mass then you can speak as one unified group and you can also make them match in the marketplace more efficiently,” he said.

Sigma Software is a Swedish-Ukrainian IT company of Ukrainian origin.

Like other companies, getting staff out of the hardest-hit areas in the first few weeks of the Ukraine war was the priority.

Sigma Software evacuated more than 2,800 people from Kharkiv, Sumy and other cities towards safe locations in the west of Ukraine and abroad.

That was challenging, but clients and partners were there to help by donating money, sharing their workspaces, and providing accommodation, said CEO and co-founder Valery Krasovsky.

He said projects and services continued to be provided even during the first few weeks of the war and that the company was fully operational within two weeks of the invasion.

This has been made easier by the fact the company's infrastructure and servers are located in the European Union and 95 per cent of its specialists work remotely on laptops.

“At first, our employees needed some time to come to their senses, to organise everything they needed in order to work and live, particularly for their families,” Krasovsky said.

But today, he says, life is slowly getting back to normal and the company recently reopened its office in Kyiv.

“Don’t get me wrong – this is not some fake bravura, it’s just the way Ukrainians are”.

Krasovsky said the company’s ambition is to become “truly international” and it decided to open offices in 10 new countries.

He said the company recently opened new offices in Portugal, Spain, and Poland, while new locations in Germany, Turkey, Czech Republic, Romania, and Bulgaria are next in line.

However, one of the challenges he says is travel as men aged 18-60 are still not allowed to freely leave Ukraine as part of the war effort.

“We are communicating with the Ministry of Economy and the Ministry of Digital Transformation on this topic,” Krasovsky said, adding he was thankful to them for trying to resolve this issue.

“We are all waiting for our victory. We believe that our heroes with the help of the Western world will be able to banish the occupiers from our soil”.