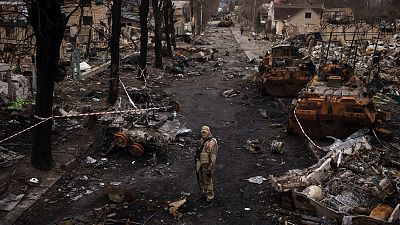 As international outrage grows over the killings of civilians in Ukraine, human rights defenders are working around the clock to collect, verify and preserve digital evidence of the attacks - to someday hold those responsible to account.

President Volodymyr Zelenskyy has described recent atrocities in his country as "war crimes" and "genocide" - accusations that Russia rejects, calling them "fakes" fabricated by Ukraine.

On the ground, journalists, human rights activists, and ordinary citizens are racing against time to take photos and shoot videos of what they’ve witnessed, and post the evidence on social media or share it with NGOs able to cross-examine it.

So, how is all this digital evidence collected, verified, and safeguarded and how might it someday help bring potential war criminals to justice? We spoke to three organisations involved in different stages of this process.

Eyes on the ground

The NGO Witness helps turn citizens into de facto reporters by teaching them how to film in a way that is more likely to be trusted by news media and judicial investigators.

"There's a range of ways you can do that, that makes it much harder for someone to claim that something was falsified in the video," Sam Gregory, Witness program director, told Euronews Next.

This includes filming continuously and in 360 degrees to show the entire context of a scene, identifying cardinal points and landmarks in the area, and filming a variety of wide shots, medium shots, and close-ups, he explained.

The International Criminal Court (ICC) announced in February it planned to investigate Russia for "war crimes and crimes against humanity". But a video posted on social media does not in itself establish responsibility for a crime, Gregory said.

A key element to bear in mind is therefore how it can be used to hold specific people to account, as international justice is "selective".

"It's how do you know that this was linked to an action of command, or that the commander knew this was happening and didn't do anything, or in fact ordered it?"

This is why the NGO encourages witnesses - when they have the opportunity to do it safely - to film command formations, commanders, the insignia they’re wearing, or any document showing orders and intentionality.

Amnesty International’s Evidence Lab focuses on content showing attacks on civilian areas or infrastructure, particularly hospitals or schools, or showing the use of indiscriminate and banned weapons such as cluster bombs.

All of these would constitute violations of international humanitarian law.

Amnesty says it has so far collected thousands of videos of alleged atrocities in Ukraine. Of these, about 50 incidents have been fully verified and cross-checked with testimonies from the ground.

The process is time-consuming. The Lab uses geo-location, metadata, satellite imagery, input from weapons experts, and eyewitness testimonies to corroborate the digital evidence.

Milena Marin, who runs the team, says they face several challenges. There’s so much material they have to set priorities and be ready to adjust them quickly as the situation evolves.

Of course, they have to contend with misinformation - debunking fakes but also deciding when to ignore the hoo-ha and stay focused, Marin said.

"We've seen a lot of propaganda and a lot of claims around what these videos are and are not. We're really trying to focus on the evidence and not necessarily to prove or disprove wild claims," she said.

She cited the attack on a maternity hospital in Mariupol, for which Russian authorities claimed the bloodied pregnant women captured on camera were "crisis actors".

“Obviously, we believe it's a massive distraction and we should focus on the evidence and what really happened” rather than chasing such claims, Marin said.

Another key challenge is the traumatic impact of watching brutally graphic footage frame by frame, over and over again.

"It's still incredibly hard to see so much suffering and so much destruction," she said.

Preserving and archiving it

Because of its graphic nature, the content can be quickly taken down by social media platforms whose policies it violates.

Meta, which owns Facebook and Instagram, said this week it was "exploring ways to preserve this type and other types of content when we remove it," specifically in relation to the war in Ukraine.

Witness and other NGOs have for years been pressuring social media companies to create repositories for evidence surrounding possible war crimes, to ensure it remains accessible to human rights researchers and investigators.

One Berlin-based organisation called Mnemonic has specialised in doing just that.

Drawing on its experience creating digital records of the wars in Syria, Sudan, and Yemen, it’s now building a Ukrainian archive.

The key is to make sure we have multiple copies of the archives in different locations,

He estimates that about 80 per cent of these records are videos, usually 1 to 2 minutes long.

Mnemonic’s software creates links, screenshots, and serial numbers and archives the records in line with an international standard ensuring it’s accessible, authenticated, and available in the future.

The files are then downloaded onto the NGO’s servers and cloud storage in Germany, as well as copied on magnetic tapes to be protected in the long run.

"The key is to make sure we have multiple copies of the archives in different locations," as hacking and destruction remain a threat, al-Khatib said.

The ultimate goal for Witness, Amnesty, and Mnemonic is to eventually enable tribunals judging war crimes to tap into this digital evidence.

Mnemonic says it has already reached out to the ICC and Ukraine, but also other countries opening investigations into the killings of civilians there, such as Sweden and Germany.

"They know what we’re doing and how we're doing it. And they know this is a resource they have access to if they want to," al-Khatib said.