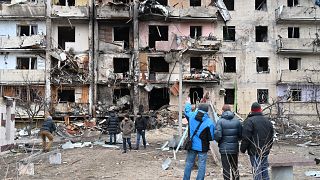 Russia was behind a cyberattack that disrupted satellite Internet connections across Europe just before the invasion of Ukraine began on February 24, the United Kingdom, United States and European Union have said.

In a statement, the UK's Foreign Office said the attack, launched about an hour before Russian forces began their assault on Ukraine, was likely aimed at the country's military.

The EU also condemned the attack, calling it "malicious".

"This unacceptable cyberattack is yet another example of Russia’s continued pattern of irresponsible behaviour in cyberspace, which also formed an integral part of its illegal and unjustified invasion of Ukraine," the Council of the European Union said in a statement.

In March, Ukrainian cybersecurity expert Victor Zhora told reporters the attack led to "a really huge loss in communications in the very beginning of war".

The attack also left tens of thousands of home broadband modems in Ukraine and across Europe "inoperable," the UK Foreign Office said, as well as knocking out nearly 6,000 wind turbines operated by the German company Enercon.

"This is clear and shocking evidence of a deliberate and malicious attack by Russia against Ukraine which had significant consequences on ordinary people and businesses in Ukraine and across Europe," Britain's Foreign Secretary Liz Truss said.

Viasat, the US company affected, confirmed in March that it had suffered a "multifaceted and deliberate cyber-attack" on February 24.

According to Viasat, the attacker exploited a misconfigured VPN to gain access to the management and operations segment of the network belonging to its KA-SAT satellite, which provides satellite internet connections to European customers.

They were then able to issue "legitimate, targeted management commands" to modems linked to the KA-SAT network that left them unable to access the internet.

"The attack impacted a majority of the previously active modems within Ukraine, and a substantial number of additional modems in other parts of Europe," Viasat said.

Russia has also been responsible for a number of other cyber attacks in the run-up to the invasion of Ukraine, the Foreign Office said.

"The UK’s National Cyber Security Centre (NCSC) assesses that the Russian military intelligence was almost certainly involved in the 13 January defacements of Ukrainian government websites and the deployment of Whispergate destructive malware," it said.