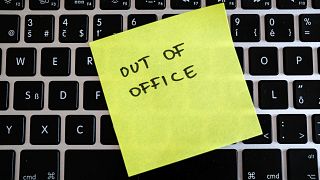 The six-month pilot scheme will study the impact of the four-day working week on companies and employees alike   -   Copyright  Matej Zukovic via Canva
By Tom Bateman  •  Updated: 15/02/2022

Workers in the United Kingdom are being offered the chance to work four-day weeks with no loss of earnings.

A six-month pilot programme announced on Monday is recruiting companies to study the impact of shorter working hours on businesses’ productivity and the well-being of their workers, as well as the impact on the environment and gender equality.

"The four-day week challenges the current model of work and helps companies move away from simply measuring how long people are 'at work', to a sharper focus on the output being produced," said Joe O'Connor, manager of the pilot scheme for 4 Day Week Global.

The programme, which is being run by researchers at Cambridge and Oxford Universities and Boston College, as well as the non-profit advocacy groups 4 Day Week Global, the 4 Day Week UK Campaign and UK think tank Autonomy, aims to recruit 30 UK companies by the time it begins in June this year.

Last year, the results of a four-day working week trial in Iceland showed that productivity at work stayed the same or even improved when working hours were cut.

Participants in the two-year-long trial also reported a "powerful positive effect on work-life balance," which included having more time to spend with their children or pursuing hobbies.

Men in heterosexual relationships who took part in the trial were also more likely to take on household chores, the Icelandic researchers found.

The UK pilot programme reflects a growing focus on more flexible ways of working worldwide, with similar schemes due to take place in the USA, Canada, Ireland, Australia and New Zealand at the same time.

The governments of Spain and Scotland have also launched their own trials.

"With the social and environmental benefits of the shorter working week becoming clearer, grassroots support more widespread, and technology available to maintain productivity, the time has come for more organisations to take the leap and unravel the practicalities," said Brendan Burchill, a professor of social sciences at Cambridge University.

Save time and energy

Organisers of the four-day week trial point to previous company trials as evidence that shorter hours can benefit both companies and their employees.

In 2019, Microsoft Japan found that cutting the workweek to four days - with Fridays given as paid leave - boosted productivity by 40 per cent.

It brought environmental benefits too: electricity consumption fell by 23 per cent, and staff used 59 per cent less printer paper, the company found.

"More and more businesses are moving to productivity-focused strategies to enable them to reduce worker hours without reducing pay. We are excited by the growing momentum and interest in our pilot program and in the four-day week more broadly," O'Connor said.