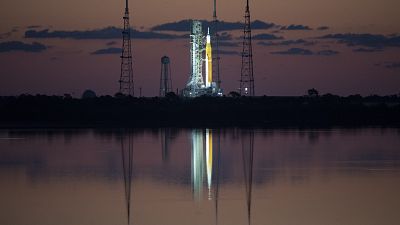 NASA has pulled its giant moon rocket off the launch pad, moving it to its assembly building for repairs after a series of setbacks halted planned tests.

The space agency has been trying to conduct a wet dress rehearsal - the last major rehearsal before lift-off - since the start of April, but it delayed its plans for the tests due to a number of issues.

Its SLS (Space Launch System) is a huge, super heavy-lift rocket for the Orion spacecraft that will carry astronauts to the Moon - and one day possibly to Mars.

“Due to upgrades required at an off-site supplier of gaseous nitrogen used for the test, NASA will take advantage of the opportunity to roll SLS and Orion back to the Vehicle Assembly Building to replace a faulty upper stage check valve and a small leak on the tail service mast umbilical,” NASA said in a statement.

For "any new launch system, when it goes through this process for the first time, that's the kind of thing you learn," Tom Whitmeyer, head of exploration systems development at NASA, told a news conference on Monday.

"The vehicle itself works very well, but the operations are very complicated," he added.

NASA added it will review schedules and options to demonstrate propellant loading operations ahead of launch.

NASA has had to push back its ambitious timeline for reaching the lunar surface, with its Orion mission beset by financial and technical issues.

Before the latest road bump, which followed several attempts to carry out the test at the Kennedy Space Center, NASA had already pushed back its expected date for a lunar landing from 2024 to 2025.

A report by NASA's inspector general (OIG) released late last year found it was likely to overshoot its 2024 target by "several years".

NASA has not yet said when it plans to conduct another test, but repairs at the assembly building will take at least several weeks, said Charlie Blackwell-Thompson, Artemis' launch director.

Artemis is the name given to the US mission to return humans to the Moon by 2025.

The first mission, Artemis 1, will mark the first flight of the SLS.

The mission will take place without an astronaut on board: the Orion capsule atop the rocket will be propelled to the Moon and placed in orbit, before returning to Earth.

The launch date is to be announced after the dress rehearsal.

Together with commercial and international partners, NASA is aiming to establish a sustainable presence on the Moon that in the longer term will be used to prepare for missions to Mars, and maybe beyond.