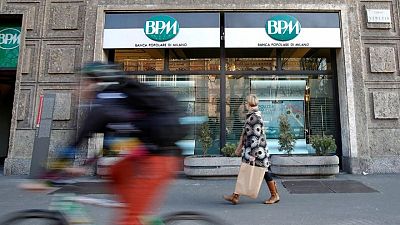 MILAN -Banco BPM is to acquire full ownership of its life insurance partnership with France’s Covea, in a move that may lead the Italian bank to strengthen commercial ties with its new top investor Credit Agricole.

French bank Credit Agricole last week bought a 9.2% stake in Italy’s No.3 bank, and said the investment aimed to broaden the scope of their strategic partnerships – currently centred on consumer finance.

After the closing, Banco BPM will receive 120 million euros from the insurance unit as a special dividend, it said.

Banco BPM had said it would bring insurance in house to drive fee income under a standalone strategy by CEO Giuseppe Castagna, following fruitless attempts to strike a merger with a same-size peer.

Castagna had brought forward to 2022 from end-2023 the option to end the Covea partnership.

He has secured an option to exit early, from Jan. 1 2023, another insurance joint-venture Banco BPM has with Cattolica, which is now part of insurer Generali.

While Banco BPM‘s plan envisages running its insurance operations alone, it may consider other options including a sale of a stake in the business to a new partner once it has full ownership, two people familiar with the matter said.

A person familiar with Credit Agricole’s thinking has said the rationale of its investment in Banco BPM is to expand business lines in its biggest market outside France.

If Banco BPM launches a competitive process for a new insurance partner Credit Agricole could be in the running, the two people said.

The French bank has said it has not requested regulatory approval to cross the 10% threshold in Banco BPM and the person familiar with its thinking said there were no plans to do so.

Banco BPM said it would seek regulatory approval for the beneficial treatment of banks’ stakes in insurers, known as the “Danish compromise”, adding 5 basis points to its core capital ratio.