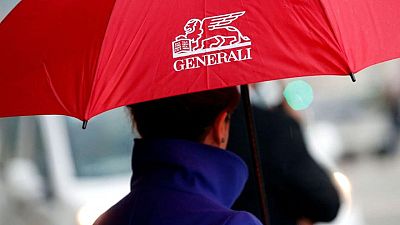 By Gianluca Semeraro and Stefano Bernabei

MILAN -Rebel challengers to Generali’s current management pledged to increase earnings by a double-digit percentage and free more cash for takeovers, setting out their plans for Italy’s largest insurer before a showdown next month.

Generali faces a power struggle over its board when shareholders vote on April 29, with investor Francesco Gaetano Caltagirone putting up his own candidates for the top jobs.

Caltagirone’s camp set out their stall on Friday with a plan dubbed “Awakening the Lion”, a reference to Generali’s nickname “The Lion of Trieste”, which features on its logo.

“Awakening the Lion” is based on the observation of Generali’s progressive and inexorable loss of competitiveness compared to its main European competitors,” the plan said.

Caltagirone, who owns more than 9% of the company, wants to replace Frenchman Philippe Donnet, who has been CEO since 2016, and install Generali veteran Luciano Cirina in his place.

Cirina served as the company’s head of Austria and CEE countries until he was suspended this week.

The challengers aim to boost earnings per share growth, including from acquisitions, to more than 14% over the 2021-2024 period. That compares with Generali’s target of 6-8%. The rebels also want to reduce the cost-income ratio to 55% from 64%.

Another target is to lift the cash available for mergers and acquisitions (M&A) to 7 billion euros ($7.7 billion), aiming for fewer but bigger deals. Generali’s plan aimed for 3 billion euros.

Appearing with Costamagna at a news conference in Milan on Friday, Cirina described the plans as “ambitious but achievable”.

Generali hit back, saying that Donnet led the company to its best performance last year and that his latest plan, announced in December, had been received “very positively” by the financial market.

The outgoing board, backed by leading shareholder Mediobanca, has put forward Donnet for a third term as CEO and nominated Andrea Sironi, a leading international expert in governance and risk management, as new chairman.

Caltagirone and fellow tycoon Leonardo Del Vecchio – Generali’s second and third-largest investors respectively – are opposing the reappointment of Donnet as they challenge the influence of Mediobanca.

About 35% of Generali’s share capital is in the hands of institutional investors while small savers hold 23%, meaning their votes are likely to prove pivotal.

Generali said its slate of candidates would best serve investors.

“The board has presented a very solid list made of excellent and qualified individuals with international experience, who will work in the interest of all stakeholders and not to the benefit of specific shareholders,” Generali said in a statement.