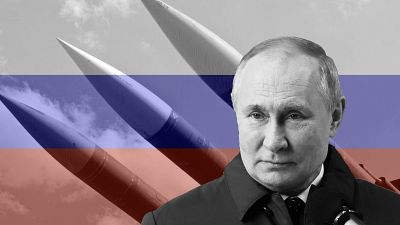 On Sunday, Russian president Vladimir Putin ordered his generals to put the country’s nuclear deterrent forces into a "high alert mode of standby combat duty" - an unprecedented move that has sparked an outcry in the West amongst NATO allies, and entreaties for calm and restraint from China.

There has been some confusion over what specifically the command means, with some interpreting Putin’s manoeuvre as an order to prepare Russia’s nuclear forces for an attack.

Experts, however, say it is a little more complicated than that.

Pavel Podvig, a leading nuclear arms expert and senior researcher with the UN Institute for Disarmament Research, points out that Putin’s order does not necessarily mean Russia is preparing for an imminent nuclear strike.

Rather, the command is a means of putting Russia’s strategic nuclear defences into a better state of readiness should they need to respond to an attack.

I think everything that involves strategic nuclear weapons should be taken seriously.

"We don't know all the details, how exactly it works, but you could use the analogy that in peacetime, the command control system is designed to be incapable of transmitting the order," Podvig told Euronews Next.

"So if you press the button, then nothing will happen because the button is not connected to anything".

The reason for this, Podvig says, is to protect the system from accidents and provide a degree of stability.

"As I understand it, you could issue that command [and] you could transfer the system into a different state in which it would be physically capable of transmitting the order," he said, adding that this is what he believes Putin’s order amounted to.

"In a way, it is higher readiness, but it does not necessarily involve any actual movement of nuclear weapons anywhere".

Still, the Russian leader has brought the spectre of nuclear weapons into the war in Ukraine and it is not something to be taken lightly, according to Podvig.

"I think everything that involves strategic nuclear weapons should be taken seriously," he said.

"At the same time, I think the procedure was designed to provide the leadership with certain assurances, with certain confidence that the strategic forces are less vulnerable".

The signal here is to warn primarily the US that an attempt to strike Russian nuclear forces would eventually be futile, and the Russian forces would be able to respond.

"The signal here is to warn primarily the US that any attempt to strike Russian nuclear forces would eventually be futile, and the Russian forces would be able to respond".

Podvig says bringing nuclear weapons into the conversation is aggressive in a different way to making an explicitly nuclear threat.

"It is aggressive in the way that it sends a signal that Russia could be more forceful in other areas being confident that it can protect itself by its nuclear weapons," he said.

What are strategic nuclear weapons?

Strategic nuclear weapons are warheads that have large ranges, cause enormous devastation, and give countries the capability of targeting an enemy’s territory and infrastructure from a great distance away.

They differ from tactical nuclear weapons which cause less destruction, have shorter ranges, and are intended for battlefield objectives.

One of the reasons countries maintain strategic nuclear weapons is for deterrence - essentially the idea that maintaining a weapon capable of annihilating a country's enemy will prevent them from using one on them, thus providing a degree of stability.

What would it be like if Russia were to escalate further?

If Russia were to decide to escalate the nuclear threat, Podvig says there are some steps they could take that he would consider “fairly serious” related to the movement of nuclear weapons.

"[Russia] could send submarines to sea and disperse its mobile intercontinental missiles," he said.

"Weapons could be delivered to aircraft and loaded onto aircraft," he continued, clarifying that this is "not where we are today".

Following Putin’s order, the US and Nato allies took a measured response, making it clear that they would not make any change to the alert level of their own nuclear forces.

Podvig believes their response was the correct one, noting how dangerous it would be for Putin’s order to lead to an escalation between the competing powers

For more on this story, watch the video in the media above.