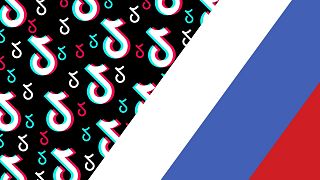 A new report found TikTok is blocking access to most foreign accounts in Russia and leaving more space for pro-Kremlin propaganda.   -   Copyright  Canva / Euronews Next
By Tom Bateman  •  Updated: 17/03/2022

TikTok is censoring content in Russia on an "unprecedented scale," according to European researchers, who say the platform is blocking access to 95 per cent of the video content previously available to Russian users.

In a statement on March 6, the Chinese-owned short video app said it would suspend livestreaming and uploads of new content by users in Russia, in response to the country's far-reaching new censorship laws that threaten jail time for referring to the invasion of Ukraine as a war.

But a new report by Tracking Exposed, a nonprofit focused on digital rights, found that TikTok is censoring content much more than it said it would, blocking access to most foreign accounts and leaving more space for pro-Kremlin propaganda.

Tracking Exposed used VPNs and Russian IP addresses to attempt to access non-Russian TikTok content. It found that no videos from European and American accounts were available in Russia, including from institutions such as the World Health Organization and the United Nations. None of the 10 most-followed global TikTok accounts were accessible.

The report found that TikTok posts from non-Russian accounts were blocked for users in Russia at the application level - meaning TikTok itself had opted to suspend access.

In practice, this means that while accounts belonging to international media, TikTok stars like Charli d'Amelio and even the platform's own official account still appear in Russian search results, their videos do not.

TikTok: 'Safety is the priority'

By contrast, pro-government accounts in Russia have been able to exploit loopholes that allow them to continue posting on the platform, essentially limiting new sources of information about the invasion of Ukraine to Kremlin-approved channels, the researchers said.

"With these recent changes, TikTok runs the risk of effectively converting itself into a propaganda channel for the Kremlin," the report stated.

A TikTok spokesperson directed Euronews Next to its March 6 statement, which said the company's "highest priority" was "the safety of our employees and our users".

"In light of Russia's new ‘fake news’ law, we have no choice but to suspend livestreaming and new content to our video service in Russia while we review the safety implications of this law," TikTok said.

"With these recent changes, TikTok runs the risk of effectively converting itself into a propaganda channel for the Kremlin,"

But the platform's decision to put measures in place that go "above and beyond" the requirements of Russia's new law could have an impact on public support for the war, Tracking Exposed said.

"The effect of TikTok’s changes since the war began is that Russian people are deprived of a global perspective on Russia’s actions in Ukraine, and can only see content heavily weighted towards Kremlin-approved information. This makes it less likely that public opinion in Russia will become critical of the war," Tracking Exposed's head of research Salvatore Romano said.

The rise of the 'splinternet'

TikTok's apparent decision to filter the content available to Russian users - thought to make up around 5 per cent of its global user base - hints at the growth of the so-called 'splinternet', where platforms regulate content based on individual national laws.

TikTok owner Bytedance is familiar with the concept. The Beijing-based company already operates a parallel version of the video-sharing app in China, where it is known as Douyin.

WeChat, a messaging service run by Chinese tech giant Tencent, follows a similar model, with the app offering slightly different features to users of the Chinese and international versions.

Chinese social media platforms have also been quick to suppress statements about Russia's invasion that do not toe the official line.

Jin Xing, China's first openly transgender celebrity and a former talk show host, had her account on Weibo - China's equivalent to Twitter - suspended after she published two posts, including one that made reference to Putin as a "crazy Russian man" and urged her followers to pray for peace, Reuters reported.

"Russia appears to be moving towards the Chinese model, where platforms are forced to abide by the government censorship guidelines in order to remain available, as seen with TikTok," the Tracking Exposed report read.