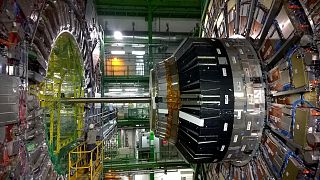 CERN, the European nuclear research organisation that hosts the world's largest particle accelerator in Geneva, decided on Tuesday to suspend Russia's observer status in response to its invasion of Ukraine.

Following a meeting of the CERN Council, its 23 member states decided to end all collaboration with Russia following a request from Ukrainian scientists.

In a statement, its members said they condemned "in the strongest terms, the military invasion of Ukraine by the Russian Federation, and deplore the resulting loss of life and humanitarian consequences, as well as the participation of Belarus in this illegal use of force against Ukraine," they wrote in a statement.

As a result, "observer status of the Russian Federation is suspended until further notice," CERN, one of the world's largest and most prestigious scientific laboratories, announced.

Along with the United States and Japan, Russia had observer status for the Large Hadron Collider (LHC) particle accelerator, a huge 27 km ring buried underground on the French-Swiss border.

Collaborations with Russia on hold

Furthermore, CERN won't "engage in new collaborations with the Russian Federation and its institutions until further notice," it said.

It added that it would also "promote initiatives to support Ukrainian collaborators and Ukrainian scientific activity in the field of high-energy physics".

CERN was founded in 1954 "with the aim of bringing nations and peoples together around science in a spirit of peace".

"This aggression, therefore, runs counter" to what this international organisation represents, it concluded.

"The situation will continue to be monitored carefully and the Council is ready to take any further measures, as appropriate, at its future meetings".

The organisation is not the first in the scientific community to see its relations with Russia fray.

The fallout from the Russian invasion of Ukraine has also impacted space operations. A planned launch of a Russian Soyuz rocket on March 4 was cancelled after the UK failed to meet Russian demands that the OneWeb satellites being launched wouldn't be used for military purposes.

Dmitry Rogozin, the head of Russia's Roscosmos space agency, has directed his ire at former American astronaut and senator Scott Kelly after he criticised Russia for covering up international flags on one of its Soyuz rockets carrying commercial satellites.

"Dimon, without those flags and the foreign exchange they bring in, your space program won't be worth a damn. Maybe you can find a job at McDonald's if McDonald's still exists in Russia," Kelly tweeted.

Rogozin also courted controversy in the days following the invasion after he suggested the International Space Station (ISS) would drop out of orbit and crash in the US or Europe as a result of foreign economic sanctions on Russia.