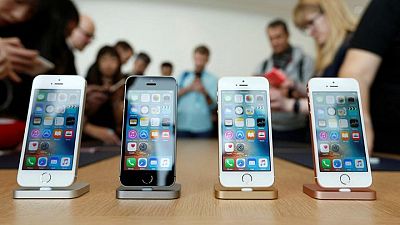 A 5G 'budget-friendly' iPhone, an iPad said to be twice as fast as its competitors and a faster chip for its desktop Mac computers are some of Apple's new products announced on Tuesday.

5G capabilities have been a big part of Apple's focus for the high end of its flagship product as customers look for powerful devices with better connectivity, with the iPhone 13 showing off custom 5G antennas and radio components for faster speeds.

Apple's cheaper SE model is also getting a 5G update, which may entice cost-conscious consumers to get new phones.

It is a smartphone that is "designed to last," said Apple chief executive Tim Cook, adding it was the company's "most affordable phone".

The iPhone SE comes with an A15 Bionic chip, which Apple says is the fastest among competition, a 4.7-inch retina display and a home button with Touch ID.

"This is important for our existing users who want a smaller iPhone at a great value," Cook said.

The United States, Japan, and Western Europe have been the top markets for iPhone SE sales in recent years, according to researcher IDC.

You can rewatch the event in the video below.

The iPhone maker is also launching a new version of the iPad Air, that will have 5G connectivity and a faster M1 chipset and will feature a 12-megapixel front camera.

No comments were made on the Russian invasion of Ukraine.

"We are deeply concerned about the Russian invasion of Ukraine and stand with all of the people who are suffering as a result of the violence," Apple said in a statement. "We are supporting humanitarian efforts, providing aid for the unfolding refugee crisis, and doing all we can to support our teams in the region".

How are tech and telecom companies building the metaverse?