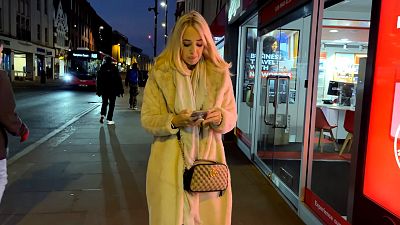 Some of the most powerful and important positions in the world are held by women - Ursula von der Leyen of the European Commission, Christine Lagarde at the European Central Bank, Janet Yellen as the US Treasury Secretary, and Ngozi Okonjo-Iweala at the World Trade Organization. They’re part of a group, showing women can be just as successful as their male counterparts in positions of power. One of the ways more women can end up in these top decision-making roles is to boost female participation in traditionally male-dominated industries.

In Europe, the organisation Stemettes is on a mission to inspire the next generation of women into careers in science, technology, engineering and maths (STEM) by showcasing a diversity of people working in these sectors.

The CEO and Founder, Dr Anne-Marie Imafidon MBE, is an author and business leader. The mathematician was voted the UK’s most influential woman in tech in 2020.

"So there's quite a few things we need to do. I think the biggest lever that we have for changing this is social norms. And I think when we look at equal pay now and back in the 1960s when we had at least here in the UK, the acts that came in to ensure that. And of course, STEM is one of those spaces that you know, people are paid really well to, to work across lots of different STEM roles in STEM organisations. And so the underrepresentation of women within STEM means actually, you know, if we were better represented, we'd actually be much closer to that, to that pay parity," Dr Anne-Marie told Euronews.

The advancements in technology have increased the dangers for women worldwide, whether it's trolling, having their personal details revealed, surveillance cameras, or tracking their location, but women are using the same technology to fight back.

So I previously had experience of sexual harassment when I was younger and out and about. So I understood the need for something like our app.

In the UK there’s been a huge rise in demand for ideas to help women feel safe on the streets, and it’s spurring women to come up with innovative tech-based solutions to protect others. Emma Kay is the creator of WalkSafe, the fastest-growing safety app in the UK. According to the former beautician, the app will soon be available across all of Europe and the US.

“We use real police crime data and we’re the only app out there that does this,” Emma Kay told Euronews.

WalkSafe raised $100,000 in the first round of VC investment, and in order to keep the app free and available to all, the tech firm is now in its second round of funding.

Emma’s app encourages people to take precautionary measures to avoid being in harmful situations. Elsewhere, Uta de Veer has developed an app that allows people to react quickly if they find themselves in danger.

I received emails from my children’s schools to be vigilant as some of the mothers have been mugged, so this triggered my idea.

The hands-free voice-activated app is triggered by a panic scream or even a whisper of the keyword sending an S-O-S to the people on the user’s emergency database.

'One Scream’ recently launched paid subscriptions and is seeking investment through a US-based startup accelerator programme.

While critics have been quick to point out women’s safety issues can’t be solved by technology alone, more clicks to download safety apps is showing that it is playing a role in making women feel safer on the streets.

For other women-led startups, it’s still not easy to secure funding. There have been efforts and campaigns to narrow the financing gap, but only 2 percent of venture capital goes to startups led by women.

I think success will continue to beget success. And I think 2022 is going to be a major year in women's health care.

Maria Velissaris is the Founding Partner of SteelSky Ventures, an all-female VC fund investing in companies that improve access to women's healthcare.

"Less than 12 percent of women venture capitalists are out there, and we can't fund every single women's health company. And so I think what we're finding is that the people with the money is reflective of the solutions that you see in the market. If we change that mix and we diversified, who is actually given the power to allocate capital, I think we'll start to see a shift in the types of companies that get developed and the types of founders that we see receive funding. I think success will continue to beget success. And I think 2022 is going to be a major year in women's health care," she said.

Despite the frustration from Ursula Von Der Leyen, the European Commission President that an EU deal on rules for women in boardrooms has taken too long to be agreed - Europe has seen progress with a number of high profile leaders at the helm of iconic organisations.

Clearly more could be done to help women break the glass ceiling in whichever field they’re in. The pandemic may have rolled back gender equality, but there’s no doubt that it gives governments and organisations all the more reason to ramp up efforts to empower women in order to build a more sustainable and fairer future. And, the more women emerge into positions of power, the more decisive the action, and the greater the returns for all of us.