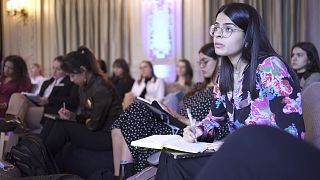 In many countries, female CEOs are still the exception. That, despite the fact, many women are leaving school and university with top qualifications. It’s an imbalance one special initiative, however, is out to change.

Sci-Tech went to Nice, France, to find out more.

Although women have made huge strides in the fields of science and technology in recent years, evidence suggests they still face some striking inequalities.

According to the UN, less than 30 percent of researchers worldwide are women.

In Nice, the Winter School of Female Leadership in the Digital Age - organised by the Chinese tech company Huawei - aims to empower some of Europe’s most talented young women. It follows on from last year's summer school in Lisbon.

The participants are put through their paces for a whole week. Coding, public speaking, cognitive science and machine learning are just some of the topics covered.

Out of 2426 applications, 27 women were selected, each representing an EU country, including for the first time a participant from the Western Balkans.

“At Huawei we are fully committed to bring all these opportunities to women all across Europe to not only join the tech sector but to also shape the future of technology,” said Berta Herrero Estalayo, the Director of Schools for Female Leadership in the Digital Age.

Aged between 19 and 24, participants must show a strong interest in technology and innovation but can come from any background. The leadership and tech classes are a space to bond, network and create.

Describing her experience, participant Cara Doumbe Kingue from France said: "The teaching approach is a lot more fun. I see things completely differently now and we really go through things step by step. It’s very intuitive actually. And it’s really the kind of thing I’d have loved to have done at school, for sure.”

The intense week of training is brought to a finale with a reward ceremony and prizes.

Dženana Selimović, another participant from Bosnia told Euronews: “How could you not feel empowered? All of this week with a group of 28 very strong women, you get to talk to them, you get to talk with people all around Europe. There’s so much positive energy.”

“I’m sure a lot of women we’ve met today will be in the spotlight as future leaders, as future CEOs, as the changemakers of the EU,” Celia Liu, a participant from the Netherlands added.