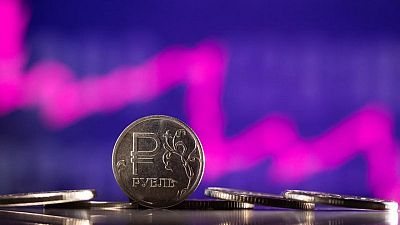 -The Russian central bank raised its key interest rate to 20% from 9.5% on Monday in an emergency move, and authorities told export-focused companies to sell foreign currency as the rouble tumbled to record lows.

The rouble hit a low of 120 to the dollar on electronic currency trading platform EBS after President Vladimir Putin ordered his military command to put nuclear-armed forces on high alert on Sunday, while the West imposed harsh sanctions against Russia.

In another attempt to support the rouble, Russian authorities told Russian exporting companies to sell 80% of their foreign currency revenues on the market, Finance Minister Anton Siluanov said.

Presenting the new emergency measures, Central Bank Governor Elvira Nabiullina said the central bank had stopped interventions on Monday due to the latest western sanctions, suggesting the rouble was supported by other unnamed market participants.

The Bank of Russia sold around $1 billion from its reserves on Thursday, Feb. 24, the day when Russia started what it calls a “special operation” in Ukraine, and also carried out FX selling on Friday, Nabiullina said.

“Due to restriction on using gold-forex reserves in dollars and euros, interventions were not carried by us today,” Nabiullina said.

Nabiullina also said Russia had an internal replacement for the SWIFT international payments system, adding that foreign counterparts can join it.

The central bank, which says it targets inflation at 4% and will do all necessary to ensure financial stability, said the rate increase will bring deposit rates to levels “needed to compensate for the increased depreciation and inflation risks”.

“This is needed to support financial and price stability and protect citizens’ savings from depreciation,” it said.

The rate hike to levels above the 17% seen in 2014 when Russian annexed Crimea from Ukraine comes after Western countries moved to block certain Russian banks’ access to the SWIFT international payment system to punish Moscow for its invasion of Ukraine.

Russia calls its actions in Ukraine a “special operation” that it says is not designed to occupy territory but to destroy its southern neighbour’s military capabilities and capture what it regards as dangerous nationalists.

“External conditions for the Russian economy have drastically changed,” the central bank said in a statement.

The recent moves add to a slew of measures announced since Thursday to support domestic markets, as the state scrambles to manage the broadening fallout from Western sanctions.

“These measures may help calm down increased market nervousness, but at the same time they undermine the foundation of the monetary policy, focused on inflationary targeting and flexible exchange rate,” BCS Global markets said in a note.

“Unfavourable external environment made Russia’s monetary policy unsustainable and we do not rule out a possible rate hike going forward or further unexpected and non-market decisions.”