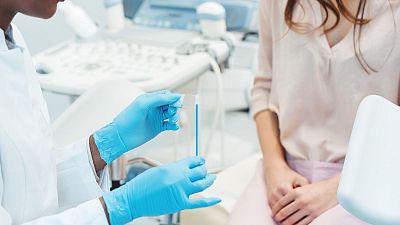 The new findings could have a significant impact on the mortality rates of the four cancers in the future.   -   Copyright  Canva
By Ian Smith  •  Updated: 02/02/2022

Cells collected during routine smear tests can be used to detect ovarian and breast cancer and predict the likelihood of a person developing the cancers in the future, according to new research.

A smear test is currently used as a test to check the health of the cervix and help prevent cervical cancer.

But according to two peer-reviewed articles published in the journal Nature Communications, it may be able to help screen for three other types of cancer that predominantly affect women.

“Creating a new screening tool for the four most prevalent cancers that affect women and people with gynae organs – particularly the ones which are currently most difficult to detect at an early stage - from a single test could be revolutionary,” said Athena Lamnisos, the chief executive of the Eve Appeal, which is funding the research alongside the European Research Council.

Similarly, for ovarian cancer the current test identified 35.1 per cent of women in the highest risk group, while the WID-Test identified 61.7per cent.

More than 250,000 European people are diagnosed with breast, ovarian, cervical or womb cancer each year, and almost 45,000 die from them.

Currently, 75 per cent of ovarian cancers are picked up at a late stage when the tumour has spread throughout the abdomen and survival rates are low. And there is not yet a reliable screening test despite substantial investment into research to find one.

How does the new test work?

The research involved assessing samples from over 3,000 women from 15 European centres. The researchers then used cervical screening samples as a surrogate tissue to measure marks on the DNA (or pattern changes in DNA methylation) of cervical cells and found that they can be specifically related to whether someone has breast or ovarian cancer.

DNA methylation can be thought of as the “software” of our cells as it determines how our cells should read and act on instructions in the DNA (the “hardware”). As people go through life, their environment and lifestyle is constantly updating the “code” to their software, and so the DNA methylation changes.

Some DNA methylation marks can result in undesirable changes to how our cells behave and this can influence our predisposition to diseases, including cancer. These changes to DNA methylation can be present years before the development of a cancer and can be used to monitor a person’s cancer risk over time.

What is the benefit?

People found to have a high risk of any of these four cancers could then be offered regular surveillance, risk-reducing surgery, or therapeutics, potentially preventing thousands of people from getting cancer a year.

“The results published today show that our tests can out-perform currently available methods,” said Martin Widschwendter, a professor at the University of Innsbruck and University College London (UCL), who is leading the research.

However, he also cautioned that further research and clinical trials were needed to confirm that the tests can accurately predict the likelihood of people developing the four cancers.