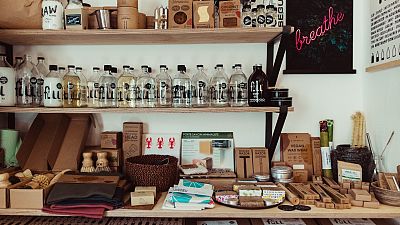 The new year started with a bang for Europe’s start-ups with many reaching unicorn status.

Seen by many as the bloc’s anti-Amazon company, Ankorstore became the second French start-up to achieve a valuation of more than $1 billion (€884 million) in 2022.

In January, the company, which sells anything from homeware to food and fashion, raised an additional €250 million in new investment, raising its valuation to €1.75 billion.

The marketplace platform connects independent brands and designers to registered retailers, florists, coffee shops, and other concept stores across Europe, allowing them to sell more varied stock that cannot be found on major e-commerce sites or large retail chains.

The Paris-based company has over 200,000 independent retailers on its platform and 15,000 brands across 23 EU countries.

What is impressive about Ankorstore is that it reached the elusive unicorn status just two years after its launch in 2019, founded by four French e-commerce entrepreneurs who wanted to change our shopping habits.

"We are entrepreneurs, we are investors, dads, we have children and we don't want to live in a world where we are on our sofa, we watch TV and we order on Amazon and the products are sent and we never leave our house," the company’s co-founder and CEO Nicolas d’Audiffret told Euronews Next.

"Our ambition is to help independent traders because it is they who make our cities and towns charming and who ensure there is a social life in our neighbourhoods".

To support this, d’Audiffret said it is important for the company to grant the technological tools that allow the independent retailers to resist the wave of big businesses and have the ability to create jobs.

The marketplace is free for brands initially but they are later charged a commission on the sales they make. The company also offers free shipping so that there are no losses on smaller orders.

With the new €250 million investment, the company hopes to expand its reach across Europe and get more countries signed up. Ankorstore also wants to improve its technology.

"Our merchants and our brands have a huge need for software, as we say computer software, to help them better manage their business," said d’Audiffret.

"What we love is creating technological tools, putting them in the hands of independent entrepreneurs and seeing them create new markets with that and then diversify".

Our ambition is to help independent traders because it is they who make our cities and towns charming and who ensure there is a social life in our neighbourhoods.

While the platform may put more originality back into shops, it will not take down a giant like Amazon, said d’Audiffret. Instead, he foresees a mix of the two models shaping the way we shop in the future.

"If you need to have diapers or ink cartridges delivered by the evening or tomorrow, whether or not it’s the cheapest way, Amazon is unbeatable and so Amazon will continue to grow," he said.

"But if you want to go for a walk at the weekend, discover nice products, and give a nice gift, then for me, there is nothing better than an independent retailer who has a concept and a passion".

He believes it is this second retail segment that will be successful in the years to come but that companies that fall between these two business models will probably disappear.

"We want to help this second segment, which is really that of the independents who are fighting not to offer the most at the lowest possible price, but are also fighting to lead special experiences for buyers who want original and authentic products," said d’Audiffret.