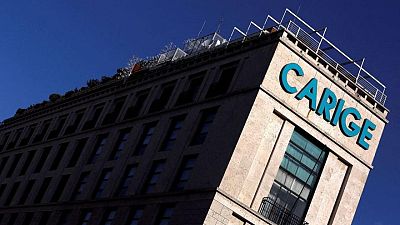 By Valentina Za and Andrea Mandala

MILAN -Shares in Italian bank Carige rose 11% on Friday as its owner prepares to select a suitor for exclusive negotiations while a third potential buyer emerged.

A deal would allow Italy to resolve a longstanding problem and the government has lined up some 400 million euros ($453 million) in tax incentives to ease Carige’s sale.

Italy’s FITD depositor protection fund, which owns 80% of Carige following a 2019 industry-financed bailout, said after markets closed on Thursday its steering committee would conclude on Monday its review of non-binding offers for Carige.

Italy’s BPER Banca, which before Christmas unveiled a rescue proposal for Carige, is vying with the Italian arm of France’s Credit Agricole, two people familiar with the matter said. Credit Agricole declined to comment.

Newspapers Il Messaggero and Il Sole 24 Ore on Friday reported that U.S. fund Cerberus was also in the running. Cerberus declined to comment.

BPER offered a token one euro for Carige and asked the FITD to inject 1 billion euros into the loss-making peer.

That sum exceeded the 700 million euros the FITD was allowed to spend based on the previous year’s contributions by members.

One source said Credit Agricole Italia’s capital injection request was significantly lower than BPER‘s, which however remains the favoured bidder according to both sources.

BPER, which has been set onto an expansion path by its leading shareholder insurer UnipolSAI, said on Dec. 21 it was ready to engage in discussions with FITD and is expected to amend its request.

The fund said on Thursday the non-binding offers for Carige were subject to a due diligence analysis to be conducted during an exclusive negotiation period. It has declined to name any interested parties.

Based in the northwestern Liguria region Carige has been hit by an excessive exposure to the fragile local economy and decades of mismanagement.

In crisis mode since 2014, when it launched the first of a string of cash calls, Carige was placed under special administration by the European Central Bank three years ago.

It has been hunting for a buyer since Cassa Centrale Banca, which had taken an 8.3% stake as part of the 2019 rescue, last year walked away from a proposed acquisition.

If allowed to take over Carige, a deal that requires government approval under Italian law, Credit Agricole Italia would again profit from tax incentives for bank mergers which it tapped, alone among the country’s lenders, for the Creval deal.