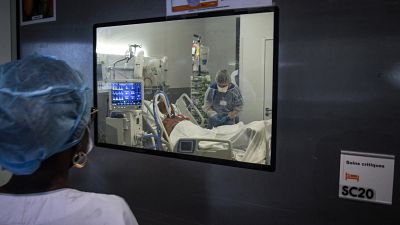 Medical staff members tend to a Covid-19 patient under respiratory assistance, in a room of the intensive care unit in Martinique.   -   Copyright  ALAIN JOCARD/AFP or licensors
By Pascale Davies  •  Updated: 02/12/2021

Approximately one in 100 patients hospitalised with COVID-19 will likely develop central nervous system complications, including stokes, researchers reported at the annual meeting of the Radiological Society of North America on Tuesday.

In the largest multi-institutional study to date on brain complications of COVID-19, researchers said the most common finding was a stroke due to clogged arteries, but the researchers also saw bleeding in the brain, inflammation of the brain, and other potentially fatal complications.

The study said among nearly 38,000 patients hospitalised with COVID-19 in the United States and Europe, symptoms led doctors to suspect brain complications in about 11 per cent.

Magnetic resonance imaging (MRI) and computed tomography (CT) exams confirmed central nervous system abnormalities that were most likely associated with the virus in 10 per cent of those patients, for an overall incidence of 1.2 per cent.

“Much has been written about the overall pulmonary problems related to COVID-19, but we do not often talk about the other organs that can be affected,” said study leader Dr Scott Faro of Thomas Jefferson University in Philadelphia in a statement.

"Our study shows that central nervous system complications represent a significant cause of morbidity and mortality in this devastating pandemic."

The study analysed nearly 40,000 cases of hospitalised COVID-19 positive patients from seven US and four western European university hospitals. The patients had been admitted between September 2019 and June 2020. Their average age was 66 years old, and there were twice as many men as women.

The most common cause of admission was confusion and altered mental status, followed by fever.

Many of the patients had comorbidities like hypertension, cardiac disease and diabetes, the study said.