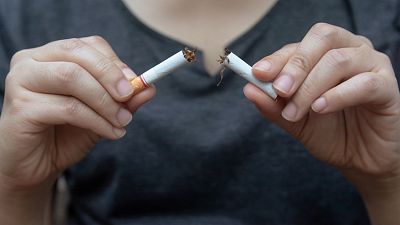 While deaths had increased, the WHO welcomed the fact that 60 countries are on track to achieve the goal of a voluntary 30 percent reduction in consumption.   -   Copyright  Canva
By Julie Gaubert  with AFP  •  Updated: 17/11/2021

The number of smokers has steadily declined in recent years, but efforts to control tobacco use must continue in the face of tobacco industry activism, the World Health Organization (WHO) warned on Tuesday.

In 2020, 1.3 billion people worldwide were using tobacco. That’s 20 million fewer than two years earlier, according to a new global report by the global health watchdog.

The WHO expects the decline to continue until 2025, when 1.27 billion people - or about 20 percent of the world's population aged 15 and over - will be smoking.

In 2000, this proportion was still almost a third of the population.

While welcoming the decline, WHO Director-General Tedros Adhanom Ghebreyesus warned that "we still have a long way to go, and the tobacco industry will do everything in its power to defend the huge profits it makes from the sale of its deadly product”.

Tobacco kills more than 8 million users every year and an additional 1.2 million people die from second-hand smoke, according to WHO statistics.

The death toll will continue to rise despite a decline in consumption "because tobacco kills slowly", the report warned.

While deaths had increased, the WHO welcomed the fact that 60 countries are on track to achieve the goal of a voluntary 30 percent reduction in consumption between 2010 and 2025, almost twice as many as two years ago.

"We are seeing significant progress in many countries," Ruediger Krech, head of the WHO's health promotion department, said, while cautioning that "this success is fragile”.

With only $1.68 (€1.50) per capita invested in smoking cessation support measures, 152 million consumers could quit by 2030, according to the WHO report.

Even if the figures, which do not include electronic cigarettes, fall, 36.7 percent of men and 7.8 percent of women worldwide were still using tobacco last year.

In addition, 38 million children aged 13 to 15, or 10 percent of all teenagers in this age group, were still smoking.

In Europe, 18 percent of women continue to use tobacco, significantly more than in any other region of the world, and "European women are reducing their use the least rapidly" in the world, according to the report.

The Western Pacific region is expected to have the highest rate of consumption among men in 2025 (45 percent).

What is endometriosis and why do we know so little about it?