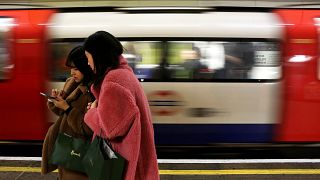 The posters, which appeared on Transport for London (TfL) trains, stations and buses, advertised a meme cryptocurrency named after Elon Musk's Shiba Inu.

But the advertising campaign has prompted calls for TfL to ban crypto adverts, with elected officials in the British capital calling for an end to adverts for "risky and unregulated investments".

In a written question earlier this month, London Assembly member and former Green Party leader Siân Berry asked London Mayor Sadiq Khan for an update on "progress in restricting these adverts from the Transport for London network".

Berry told Euronews Next she was not looking to single out crypto, but had wider ethical concerns about the impact of advertising on London's public transport.

"My effort to limit these ads is just one aspect of a much wider review of advertising rules on the public transport network, which includes restrictions on adverts by repressive regimes, payday lenders, gambling companies and those that promote an unhealthy body image," she said.

While the crypto industry is unregulated in the UK, the country's Advertising Standards Agency (ASA) and finance regulator the FCA control the way it is advertised, requiring disclaimers that warn investors their money could be at risk.

A spokesperson for Khan, who as mayor oversees the transport agency, said: "TfL is writing to the ASA and FCA to ask for their views on the concerns being raised. Once TfL has that input, they will consider what action might be necessary going forward".

TfL told Euronews Next that it ensured the necessary disclaimers were in place on crypto adverts hosted on its services and stations.

"We continue to work with the ASA and FCA to encourage better regulation of cryptocurrency and will be discussing the concerns that have been raised with them to get their input as we consider what action might be necessary," a TfL spokesperson said.

"In the meantime, our media partners will continue to work with advertisers to ensure that all advertising copy complies with our policy and ASA regulations and, since 2018, we have asked our advertising partners to refer all cryptocurrency advertising to us for review prior to it running on our estate".

'Be prepared to lose all your money'

This is not the first time crypto advertising on London's public transport has sparked complaints.

In February, the UK's advertising regulator banned a marketing campaign for a cryptocurrency exchange on the grounds that it "irresponsibly suggested" that investing in Bitcoin was simple and low risk.

Regulator anxiety over the risks crypto investments pose to consumers has grown in recent months as interest in the digital tokens has exploded.

Last week, Indian prime minister Narendra Modi chaired a meeting to discuss the future of crypto in the world's second-most populated country, with the Indian government reportedly keen to limit the ways crypto exchanges and platforms can reach new customers.

In September, the chair of the UK's financial regulator called for regulation of the crypto industry after celebrity Kim Kardashian West promoted a cryptocurrency to her 250 million Instagram followers that subsequently crashed.

"There is no shortage of stories of people who have lost savings by being lured into the crypto bubble with delusions of quick riches, sometimes after listening to their favourite influencers, ready to betray their fans’ trust for a fee," Financial Conduct Authority boss Charles Randell said.

While there is no suggestion that Floki or its anonymous creators are acting dishonestly, the unregulated crypto space is home to a number of scams that regularly claim victims.

Holders of a Squid Game-themed cryptocurrency were left holding worthless bags of the token after its creators executed a rug-pull scam earlier this month.

The project claimed that players who bought the token could take part in a game inspired by the Netflix series, in which desperate people risk death in an attempt to win a large cash prize.

However, the promised game never materialised, and the project's website and social media accounts were deleted as the token crashed in value after a crypto wallet associated with its creators cashed out almost €3 million.

Plan to ban most cryptocurrencies in India sparks selling frenzy