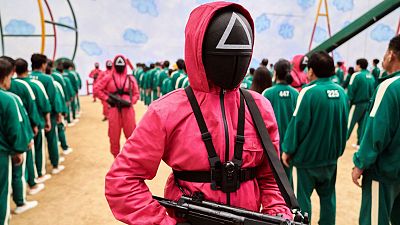 A Squid Game-themed cryptocurrency plunged in value on Monday in what appears to be a deliberate act, falling from a high of around €2,400 to fractions of a cent in minutes.

The SQUID token, which has no official connection to the hit Netflix drama, was launched last week with promises of an online game and large prize pool.

The project claimed that players who bought the token could take part in a game inspired by the Korean show, in which desperate people risk death in an attempt to win a large cash prize.

However, the promised game never materialised. On Monday, the project's website and social media accounts were deleted as the token crashed in value.

A crypto wallet associated with SQUID's creators appeared to have cashed out almost €3 million worth of the token on Sunday and Monday via a transaction anonymising service, according to publicly available data.

Euronews Next was not able to contact the project's creators as a result.

This kind of scam - known as a "rug pull" - occurs when a project's creators vanish along with the money received from investors.

In the case of SQUID, buyers found that they were unable to sell the tokens once they had bought them, leaving their money vulnerable to Monday's crash.

Twitter sets up crypto team in bid for decentralisation

Glitch leaves €134 million in Comp crypto up for grabs