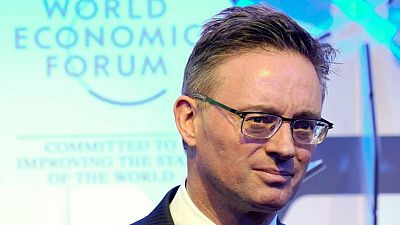 By Mohi Narayan and Mai Nguyen

– Europe is at risk of power outages this winter due to insufficient gas reserves and over the long-term, oil could rise above $100 a barrel, the chief executive of commodity trading giant Trafigura said on Tuesday.

Demand for oil, coal and natural gas as well as metals such as cobalt, nickel and copper have soared as the global economy reopens from COVID-19 restrictions, triggering price spikes that threaten the nascent recovery.

European gas prices have hit record highs this year prompting some countries to respond with emergency measures such as price caps and subsidies but that may not be enough, Jeremy Weir said.

“We haven’t got enough gas at the moment quite frankly, we’re not storing for the winter period. So hence there’s a real concern that there’s a potential if we have a cold winter that we could have rolling blackouts in Europe,” Weir said at the FT Commodities Asia Summit.

Some European lawmakers have accused Moscow of restricting supply to put pressure on Germany to speed up the authorisation of the Nord Stream 2 pipeline. Russia has denied this.

The higher price of natural gas has boosted demand for oil with benchmark Brent crude up 60% since the start of the year, trading at above $80 a barrel.

Climate change has put oil companies under pressure to shift away from polluting fossil fuels and the resulting drop in investment in new production is adding to the price pressure.

“I think people need to recognise it’s not a situation where you might just flick the switch and you increase production. There’s a lot of investment, it takes some time to do that,” said Weir.

“I think we have got a bit of an issue looming on oil prices on a long-term basis, I think $100 plus on oil … (is) very possible.”

Front-month prices are about $1 higher than those in the second month, a market structure known as backwardation that indicates tight prompt supplies as the Organization of the Petroleum Exporting Countries (OPEC) and their allies continue to restrict production. [O/R]

“There are some OPEC members that probably can increase supply very quickly,” Weir said.

Privately owned Trafigura is one of the world’s biggest energy traders and in June reported record first-half profits as demand for oil and other commodities soared.

Weir warned on Tuesday about significant deficits for cobalt, nickel and copper as global demand rises for electric vehicle batteries and renewable energy.

“Some of these metals are just not going to be available due to the increase in demand,” he said.

“We’ve already seen a significant increase in demand not just from China but also from the U.S. and from Europe and we expect to see significant deficits in some commodities.”

Copper inventories in warehouses of the London Metal Exchange and the Shanghai Futures Exchange are hovering around multi-year low levels. LME cash copper premium over the three-month contract leapt to a record on Oct. 18, a few days after LME on-warrant stocks dropped to their lowest since 1998. [MET/L]

““Once we get through possibly Chinese New Year into the end of Q1 of next year … Unless we see a major meltdown in industrial production out of China, I think we got a pretty critical situation with respect to copper prices,” the executive said.

He said nickel from certain locations, like Indonesia, for example, has a very high carbon footprint compared with other sulphide-based producers.

Trafigura is investing in carbon capture and storage and Weir said carbon trading could become Trafigura’s third pillar of business after the business was launched in April.

“What’s interesting is that people shy away from decarbonisation, and I think it’s a great challenge, but also it’s a fantastic business opportunity,” he said.