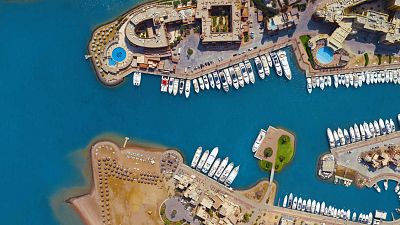 What does it take to build your own town? The Egyptian development company, Orascom, has written the playbook when it comes to giant construction projects in the middle east. They have given rise to a town from the desert, which has become a holiday hotspot. The project has continually grown since its construction started back in 1989, but it has come with challenges, such as town infrastructure, supply logistics, and population maintenance.

As you approach El Gouna by air, you see the kilometres of coastline, the crystal blue waters and lagoons, and around twenty islands.

The Red Sea resort town is just over 30 years old but has matured into a year-round destination with a thriving community. It is now home to 24,000 people with a school, university, hospital, places of worship, a thriving water sports community, and is home to the local football team El Gouna FC, who play in the Egyptian premier league.

He said that eventually, it evolved into a town where you can live, work and play.

“At the very beginning, people didn't know what this whole thing was about, right? And I think initially it started out as word-of-mouth people started discovering the place.”

He added that people slowly started to increase their trip length.

“Many thought, let's actually consider not only going and visiting El Gouna for two or three weeks a year but let's start thinking seriously about coming and living in El Gouna for six months a year or eight months a year. And eventually, now we've got people who actually live here year-round and work here and play here.”

How did Orascom build a town that is now a thriving resort?

Omar El Hamamsy, Group CEO of Orascom Development said that when initial plans were formed El Gouna was just a spot on the Red Sea, almost five hours away by car from the nearest major city.

“There's the whole logistics of actually building out the place, getting all the infrastructure in place. There is the initial attraction of people to consider coming here, spending their time here, both people who want to come and live here," he told Euronews.

With over 2700 hotel rooms, El Gouna is undoubtedly geared towards tourists with watersports such as diving and kite and windsurfing extremely popular, but the town has recently begun to attract a different kind of resident.

Where do people choose to live and work during the pandemic?

He added that El Gouna has become a very real alternative today for people either living and working in Europe or around the Middle East, marking a realised vision of building a year-round town 32 years ago.

From diving to kitesurfing: A guide for discovering the Red Sea