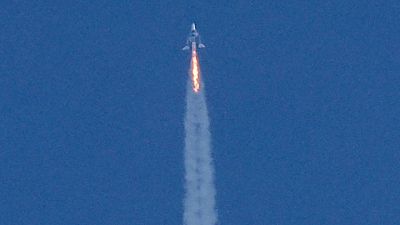 WASHINGTON -Space exploration company Virgin Galactic Holdings Inc said on Thursday it is delaying its commercial space travel service to the fourth quarter of 2022 and will not conduct another planned test flight this year.

Virgin Galactic said “commercial service is now expected to commence in Q4 2022.” Shares in the company fell 13% in afterhours trading.

The U.S. Federal Aviation Administration (FAA) on Sept. 2 had barred Virgin Galactic from flying its SpaceShipTwo pending completion of a report into the flight of the Virgin Galactic rocket plane that carried British billionaire Richard Branson to the edge of space.

Branson was among six Virgin Galactic employees who took part in the July flight, soaring more than 50 miles (80 km) into space.

The FAA on Sept. 29 closed its mishap investigation into the July 11 Virgin Galactic Unity 22 launch, which deviated from assigned airspace on descent, and lifted a grounding order it had imposed earlier.

Virgin Galactic had said in September it was planning another SpaceShipTwo flight from New Mexico, Unity 23, pending technical checks and weather. The company said last month the earliest it expected “to open its flight window for Unity 23 is mid October.”

But Virgin Galactic on Thursday said it will now begin its planned enhancement program first and will conduct the Unity 23 test flight after this work is complete and before starting commercial service.

The enhancement program is designed to improve vehicle performance and flight-rate capability.

The company said on Thursday one recent laboratory-based test “flagged a possible reduction in the strength margins of certain materials used to modify specific joints.”

The company added the “new lab test data has had no impact on the vehicles, our test flight protocols have clearly defined strength margins, and further analysis will assess whether any additional work is required to keep them at or above established levels.”