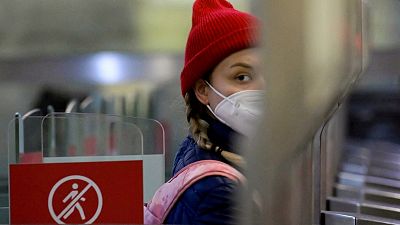 The Moscow metro system is introducing a new contactless payment system using facial recognition software despite concerns from privacy and security advocates about the technology.

The Russian capital's underground rail system, which dates back to the 1930s, has been trialling the use of a facial recognition-based system since December 2020 with thousands of Muscovites already signed up for the scheme.

Called FacePay, it will be in place for passengers to use at all 241 stations on Moscow's 14 metro lines from October 15, city authorities said.

"Passengers don't need to have their phones or 'Troika' metro pass, or any other ticket on them now," Anna Laposhkina, Deputy Head of the Moscow Transport Department press service, said.

"They just need to upload their data in an app, their photograph, and attach a bank card".

Passengers can use the technology at any of the designated turnstiles if they have a metro account set up with their banking details and biometric data.

After approaching one of the turnstile cameras, the fare is automatically debited from the passenger's bank account and the turnstile opens.

It's the first time facial technology payments have been used on such a large scale, according to Moscow's Department of Transport.

However, there are deep privacy and security concerns around the increasing use of facial recognition technology in Russia.

The lack of regulation and accountability around it at the federal level has allowed a lack of transparency and data protection in local policies, according to the Human Rights Watch.

The technology has also been used to target people on the country’s wanted list and there are fears it could be used by the Russian government to crackdown on opponents.

There have also been several cases of mistaken identities from the system.

In October 2020, a Russian man reported to Roskomsvoboda, a prominent Russian digital rights organisation, that he was erroneously detained by police in the Moscow metro when a facial recognition system (not FacePay) wrongly identified him as a person on a wanted list and notified the police.

"The use of facial recognition technology to curtail the freedom of expression and association of people in Russia shows the repressive potential of this technology," said Hugh Williamson, Europe and Central Asia director at Human Rights Watch.

"The government should stop using this intrusive technology in public spaces instead of continuing to expand its use without minimal safeguards in place".

Facial recognition has also been used to detain protestors.

Following protests in January over the arrest of the political opposition leader Alexei Navalny, local media reported the detention and prosecution of more than a dozen protest participants and passers-by based on the facial recognition data.