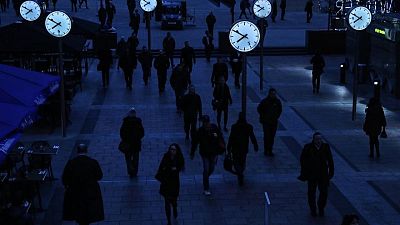 By Carolyn Cohn and Iain Withers

LONDON – Major banks in Britain made a slight dent in their gender pay gaps last year, according to a Reuters analysis, though industry observers say they still have a long way to go. Several insurers went backwards.

Companies in Britain with more than 250 employees have been required to publish the difference between the pay and bonuses of their male and female employees since 2017.

They got a reprieve last year due to the COVID-19 pandemic – though many still filed data – and had an extra six months to publish data for 2019/2020. The deadline is Oct. 5.

The financial services sector has typically shown one of the largest gender pay gaps in Britain, often attributed to a lack of women in senior jobs.

Reuters collated pay gap data from 21 major financial institutions, which showed a narrowing in their average mean gender pay gap of just 0.4 percentage points to 33.4% in the year to April 2020, from 33.8% in 2019.

Banks alone had a pay gap which narrowed by one percentage point.

The mean average gender pay gap for all UK employers in the year ending April 2019 was 14.6%.

“The UK’s financial services industry has often been singled out,” said Ann Francke, chief executive of the Chartered Management Institute.

“It really does have to get its house in order – the industry is a huge employer in the UK and it has a real opportunity to lead by example.”

Goldman Sachs had the widest gender pay gap in the year to April 2020 among the companies surveyed by Reuters, though the gap narrowed more than at other banks compared with a year earlier.

Goldman posted a gender pay gap of 51.8%, a tightening of 1.4 percentage points. The bank told staff in a memo in April that narrowing the gap further was a “critical priority” and its firmwide goal was to have 40% representation of women at vice president level by 2025.

“There is clearly more still to be done,” a spokesperson for banking lobby group UK Finance said, adding many of its members had committed to the government’s Women in Finance Charter.

FTSE 100 insurers Prudential, Legal & General and M&G reported a widening in their pay gaps, according to government filings and company reports.

Prudential’s UK gender pay gap widened to 45.2% from 40.3%, which the Asia-focused insurer attributed in its latest gender pay gap report at least in part to the spin-out of its UK life insurer and asset manager M&G in 2019.

“We are determined to narrow our gender pay gap and will do this by achieving better representation of women in all roles at all levels of our organisation, especially in leadership positions,” an M&G spokesperson said by email.

“Legal & General is tackling the underlying causes of its pay gap by creating a more diverse workforce and a more inclusive culture through sustained, long-term action,” the insurer said in its latest gender pay report.