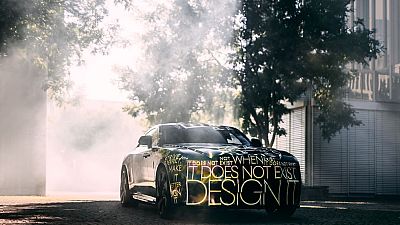 The electric car, named in keeping with the brand's tradition giving its models ethereal names such as Ghost, Wraith and Phantom, is expected to be available in late 2023.

The development prototype — based on the Wraith coupé — is adorned with one of the best-known quotes from company co-founder Charles Rolls: "Strive for perfection in everything you do. Take the best that exists and make it better. When it does not exist, design it."

The quotes' presence is likely to be a nod to Spectre's totally bespoke mechanical make-up, which, Rolls-Royce claims, will be "free of any group sharing strategy".

Rolls-Royce CEO Torsten Müller-Ötvös said that the launch was the most significant day in the history of Rolls-Royce Motor Cars since the company was founded in 1904.

"This extraordinary new product will elevate the global all-electric car revolution. We are creating the first – and finest - super-luxury product of its type," he told Euronews.

"We are going electric and this is not just the prototype. This is the real thing and it goes into the first Kleinhenz fourth quarter in 2023. And for that reason, it is a very significant announcement for our company."

The announcement fullfills a prophecy for electric vehicles made by founder, Charles Rolls, in 1900 and the Müller-Ötvös' promise to bring a fully electric car to the market this decade.

Rolls-Royce kick-started its research in electric powertrains in 2011 when it revealed the 102EX, a fully operational all-electric Phantom.

Five years later it unveiled the fully electric concept 103EX, which represented its vision for the carmaker several decades into the future. The brand hopes to go fully electric by 2030.

Spectre's testing programme will be the most demanding in Rolls-Royce’s history. It will cover 2.5 million kilometres – a simulation of more than 400 years of use for a Rolls-Royce on average – and will travel in all conditions and terrains around the world to push the model to its limit.

The use of electric motors is not a new concept for Rolls-Royce. Sir Henry Royce was fascinated by all things electrified, and his first venture, named F. H. Royce and Company, created dynamos, electric crane motors and patented the bayonet-style light bulb fitting.

However, it was Charles Rolls who truly prophesied an electrified future for automobiles.

In April 1900, Charles drove an early electric car named the Columbia and declared its electric drive to be ideal. "The electric car is perfectly noiseless and clean," he declared.

But Rolls-Royce's famous 12 cylinders will remain for "quite a long, long time". "We are not transitioning into electric from one day to the next. We are starting now. And for that reason, our 12 cylinders is with us and the 12 cylinders is still highly relevant for our clients worldwide", said Müller-Ötvös.

Watch the full interview with Euronews anchor Tokunbo Salako in the video player above.

We went off-roading with the Rolls-Royce Cullinan in Scotland

Rolls-Royce's new Phantom VIII: What you need to know