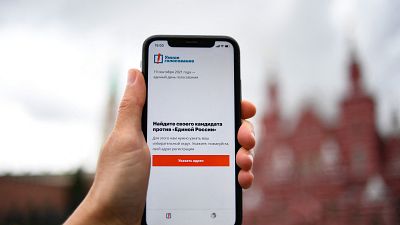 The jailed Russian opposition leader Alexi Navalny and his allies may not be running in the September 19 parliamentary election but they had hoped to challenge President Vladimir Putin's United Russia party with a strategy known as “Smart Voting”.

But the app, created by Navalny and other opposition leaders, was removed from Apple and Google stores on Friday, the day Russians started casting their ballots.

What is the Smart Voting App? And why did the tech giants bow to pressure from the Russian authorities to remove it? Euronews Next takes a look.

What is the Smart Voting App?

Navalny came up with the idea of Smart Voting in 2018.

It works via an app that shows which candidate users should vote for to have the best chance of beating Kremlin-aligned politicians in the country’s electoral districts.

Candidates from any party would be eligible, so long as they were opposing Putin’s United Russia.

Navalny’s team had also created a Smart Voting chatbot on the messaging app Telegram and published a list of candidates Smart Voting endorses in Google Docs and on YouTube.

Navalny’s top strategist Leonid Volkov told The Associated Press that Smart Voting had been monitoring and analysing hundreds of campaigns and would be endorsing about 1,300 candidates — not just for the State Duma elections but also for various regional ballots that are being held on the same day.

In the State Duma election, all 450 seats are at stake, and United Russia currently holds 334 of them.

There will be 14 political parties on the September 19 ballot, and voters will pick one of them to send another representative to the Duma.

For that second choice, Volkov said Smart Voting recommended selecting any party other than United Russia that is likely to pass the 5 per cent threshold required to win a seat.

Why did Apple and Google remove it?

The tech giants had faced pressure in recent weeks from Russian officials, urging them to remove the app, saying failure to do so will be interpreted as interference in the election and threatening them with fines.

Google was forced to remove the app because it faced legal demands by regulators and threats of criminal prosecution in Russia, the Associated Press said, citing a person with direct knowledge of the matter. They also said Russian police officers visited Google’s offices in Moscow on Monday to enforce a court order to block the app.

The person spoke on condition of anonymity because of the sensitivity of the issue.

Navalny’s close ally Ivan Zhdanov tweeted a screenshot on Friday of what appears to be an email from Apple, explaining why the app should be removed from the store.

Volkov wrote on Facebook that the companies “bent to the Kremlin’s blackmail”. He also noted that the move doesn’t affect users who have already downloaded the app, and that it should be functioning correctly.

Apple and Google have not responded to media requests for comment.

Kremlin spokesman Dmitry Peskov told reporters Friday that the presidential administration “definitely, of course” welcomes the companies’ decision to remove the app, as it comes in compliance with Russian laws. Peskov said that the app was “outside the law” in Russia.

Russia opens new extremism probe against Navalny and his allies