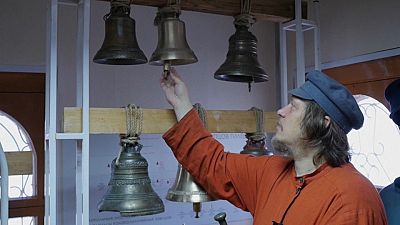 A museum in Russia has turned to technology to give old bells a new lease of life.

The Novosibirsk Museum of Bell Ringing is using 3D technology to show visitors what the bells would have sounded like when they were new.

The museum is home to the oldest bell, which dates back to 1817.

"We scanned 22 bells here within the project, and we scanned about 50 bells on these trips. Now we probably have about 100 3D copies of Siberian bells cast before the revolution," said Aleksey Talashkin, deputy head of the Siberian Centre of Bell Ringing.

He has travelled all over Russia to study bells, taking 3D scans to create casting moulds that would produce the perfect replicas, sometimes right up the bell tower rather than in a workshop.

"It's possible to repeat exactly the chemical composition and bell shape, but we are unable to repeat all the processes of casting from beginning to end [the way they were in the past]. First, we don't have the furnaces with which they used to melt," said Viktor Vasilyev, head of the technical department of the Siberian Centre of Bell Ringing.

Bells have always played an important role in Russian life: in addition to religious purposes, they were used to signal fire, danger or weather changes.

Watch the full report in the video player, above.