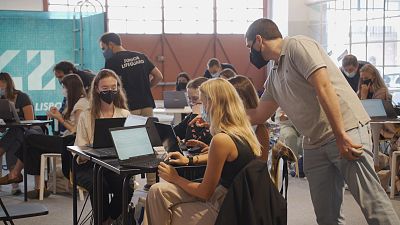 The first edition of a leadership training course for talented young women has been held in Lisbon.

The 27 participants of the Summer School for Female Leadership are curious, ambitious and come from all the EU member states.

These young women aged 18 to 24 participated in an ambitious week-long programme promoting leadership skills. They learnt team-building with a treasure hunt and were also able to brush up on their programming skills at one of Portugal’s most innovative coding schools.

In all, 1225 European women applied for the Summer School for Female Leadership. It wasn't an easy job for the jury who had to choose 27, one from each EU member country.

Anne is from Denmark and works for an NGO. She was one of the lucky few to be able to take part. She feels very privileged to participate. She said that when she applied for a place, she wrote that she would like to use some of the skills that they would learn to find her way into IT. She is already focused on the future.

Currently, women make up less than 20% of the tech industry. The goal of the Summer School is to change this imbalance. To that end, high-profile female speakers and startup founders were invited to share their experience with the participants.

Dora Palfi, Co-founder and CEO of Imagilabs, was one of the guests. She gave invaluable advice to the young women. According to her, the most important thing in a startup is to find the right people to work with. "Everybody has bad days, being there for each other and complementing each other, pushing through, that has been the most valuable thing", she explained.

The week event was packed with public speaking, introductions to coding, algorithms, cybersecurity, but also lessons in wellbeing and fun activities like pottery.

But besides knowledge, what makes an inspiring leader?

Beatriz Becerra is a jury coordinator at the Summer School for Female Leadership. In her words, an inspiring leader is someone who leads by example, leads through actions. "That is what they need to focus on because that is where many things come together. It's working as a team, it is having the capacity for a strategic vision, organisation, and many things."

In order to develop those skills, the women were divided into three groups to prove their willingness to compromise and to encourage innovative thinking. Anne from Denmark was one of the group leaders. The task was to find a strategy to build a European network of future female leaders as the Summer School does not want to leave anyone behind.

I know that I can be a leader and I can have a family as well. That’s all I need to know. I want to become a leader and now I will go for it

This week-long event was an initiative organised by the Chinese technology giant, Huawei, a company that says it wants to close the gender gap.

Berta Herrero, the Summer School programme Director at Huawei told euronews that "Huawai's vision for female leadership is that of a world where everyone is equally equipped to lead and everyone has the opportunity to do so". According to her, they proactively support girls around the planet and especially in Europe to lead. With schools like the Summer School for Female Leadership, it helps them acquire the knowledge that they need to shape the digital era."

After one week of hard work, all the participants felt like empowered winners. The first summer school for female leadership in Lisbon was a success. Next year’s edition is already in the pipeline.