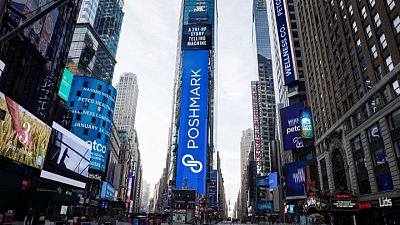 Poshmark’s shares slipped 7% in after hours trading, poised to settle more than 25% below its initial public offering price in January.

Apple in April enforced a rule requiring developers to seek permission for gathering data that can be used to track users across other sites and apps. Facebook Inc had criticized the policy, saying it could harm customers.

Poshmark, which relies on social media marketing to draw in shoppers, felt the impact of Apple’s new policy late in the second quarter and expects it to continue into the current quarter as well, Chief Executive Officer Manish Chandra told Reuters in a call.

The company forecast third-quarter revenue of $81 million to $83 million, with the mid-point slightly below estimates of $82.4 million.

But Chandra was confident the effects of Apple’s policy were only temporary, as Poshmark has been spending heavily on alternatives such as TV ads and tie-ups with celebrities like Marie Kondo.

“It will work itself out as we go through the quarter and the second half, largely because our channels are quite diversified and super adaptable,” Chandra said.

Poshmark said revenue rose 22% to $81.8 million in the second quarter, beating Refinitiv IBES estimates of $80.3 million, as it pulled in thrifty young buyers looking for more environmentally sustainable ways to shop for everything from pre-owned T-shirts to high-end boutique dresses.

The Delta variant of the coronavirus was not a major concern for Poshmark in its revenue outlook, Chandra said.