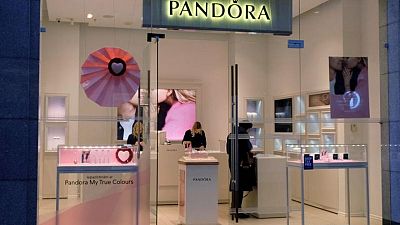 COPENHAGEN – Jewellery maker Pandora raised its full-year sales and profit margin forecasts on Friday, predicting fewer stores would have to close due to the pandemic than initially assumed.

The Danish company said it now expected underlying sales growth of 16-18% this year, up from its previous estimate of above 12%. It forecast a margin on earnings before interest and taxes (EBIT) of 23%-24%, up from more than 22% previously.

“The updated guidance is based on the assumption that 5% of the stores will be temporarily closed or severely impacted due to COVID-19 during the second half of 2021,” it said in a statement.

However the company, known for its bracelets and charms, said it expected to permanently close 25-50 of its concept stores, compared with previous guidance for “no major changes to the overall concept store network”.

Pandora has around 2,700 concept stores worldwide, out of a total of around 6,700 points of sale.

Sydbank analyst Per Fogh said Pandora’s statement was “very positive”, but suggested some investors had been disappointed by in-store sales growth and the permanent store closures, although personally he viewed the latter as plus.

“The pandemic and store closures have proven to Pandora and the market that online sales can make up a significantly larger share than earlier,” Fogh told Reuters.

The company, set to announced detailed financial results on Aug. 17, said underlying sales rose 84% in the second quarter compared with 2020 levels, and were up 13% against the same period in 2019.